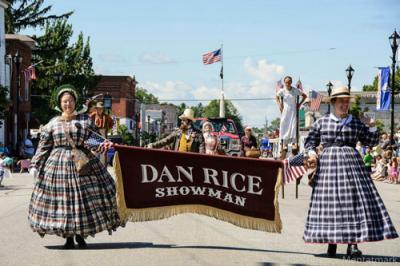 He's a renowned American figure who is celebrated annually through a three-day celebration in a township that he once considered home - just west of the city of Erie – in Girard.

And his celebration – Dan Rice Days – is an affair that recognizes the innovator, political candidate (he ran for Senate, Congress, and President) and most importantly – entertainer.

While Rice was mainly preeminent before the American Civil War, he is responsible for changing the circus into what it is today by mixing animals, acrobats, and clowns [something apparently unheard of long ago]. Unfortunately his talents slipped somewhat into obscurity – so much so, he's even been coined as "the most famous man you've never heard of."

Except locally, that is.

The festival features artisans, craft sellers, community booths, and live entertainment  - all free of charge. There are a number of activities for attendees of all ages – everything from magic shows and live music (Tennessee Backporch, Gem City Big Band, and O'Needers to name a few), to a Saturday morning parade, crafts, great food, and wine tastings.  The three-day celebration officially kicks off July 31 at 6 p.m. with an opening ceremony on the main stage. For a complete listing of events, go to: DanRiceDays.com/schedule.php – Rebecca Styn