Atrocity Exhibition is a showcase of versatility and a step toward artistic maturity. 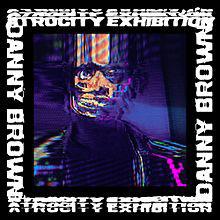 It's easy to contribute Danny Brown's rise in rap to his idiosyncrasies. He's the Detroit punk rapper, the self-proclaimed "Adderall Admiral," whose music exists to assault its listeners with an abrasive voice, enormous beats, and painfully crafted lyricism. Atrocity Exhibition is saturated with everything that we've come to expect from Brown, but it's the artist's willingness to experiment on this album that allows him to break new ground. As a whole, the album engages themes of isolation, mental collapse, and drug abuse. Warp Records' history of signing sonically visionary artists (think Boards of Canada and Flying Lotus) wasn't lost on Brown, and he allows himself to be challenged by the breadth of his soundscape. Certain transitions are jarring, but it's his ability to blend form with content that earn each track a position within the album's arc. Lyrically, it is allusion-heavy and critical, and Brown's word-play is often at its most intricate. By the end, its themes may feel overstated, but Atrocity Exhibition is a showcase of versatility and a step toward artistic maturity. – Nicolas Miller