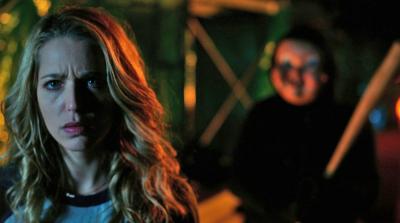 No, just because you acknowledge in your movie that you're ripping off Groundhog Day doesn't make it any less of a rip-off of Groundhog Day. And ripping off the basic premise of Harold Ramis's film would have been fine if the story went anywhere interesting, but unfortunately, Christopher Landon's Happy Death Day has nowhere to go beyond it's intriguing concept.

The story follows college student Tree Gelbman (Jessica Rothe) who suddenly finds herself repeating the same day again and again; a day that happens to be both her birthday and the day that will end with her being murdered. Now Tree has to use this new ability to uncover her murderer.

That's pretty much it as far as story is concerned. The film knows it's far too ridiculous to be a horror story so it instead tries to be some kind of absurd comedy with the humor coming from Tree's reactions to living the same day over and over. Unfortunately, unlike its inspiration, there just isn't anything very interesting or insightful to do with the character or her predicament so the whole exercise just becomes tedious.

In the end, Happy Death Day isn't scary, isn't particularly funny and falls flat as a character study. Much like the film's main character, I just wanted it all to end but the end didn't come soon enough. — Forest Taylor

by Ally Kutz9 hours ago