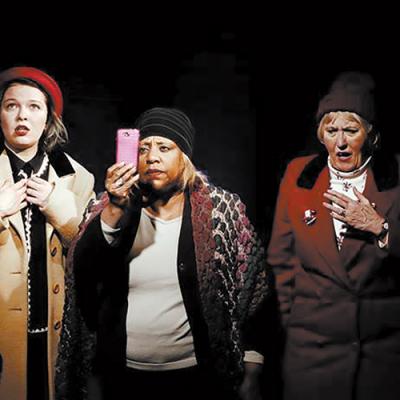 Although not typically topics that first come to mind when thinking of comedy, they're at the heart of what Erie playwright Richard Boler explores in The Miserable Mrs. Head, a one-act play that debuted at PACA Thursday, Feb. 11 and continues its run Thursday, Feb. 18 through Saturday, Feb. 20. And like Boler's past work – Spooks: The Haunting of the Skowronski Sisters and The Bad Haircut: A Disconnected Comedy – Mrs. Head leaves an indelible impression. Its examination of the human condition and barbed commentary on contemporary culture unfold at a bus stop on Christmas Eve, featuring three women, one drifter, a few flashbacks, and two very important phone calls.

Poking at pop culture can be a writer's nightmare. A reference that's funny and pointed today may be passé tomorrow. Popular tastes can be fickle; and such unpredictability can leave a writer looking out-of-touch, old, or hackneyed if the script relies too heavily on the jokes of now rather than the pervasive themes time refuses to forget.

Boler, a master of satire and keen societal observer, uses the former to augment the latter, resulting in a play that will be as good decades from now as it is today. This always has been – and always will be – no country for old folks, where the young command the pace of now, only to one day be outpaced by generations that follow. More importantly, we're always changing the ways we communicate: missing messages, mixing messages, and breaking or making connections.

Director Mark Tanenbaum superbly works a tight cast into a small space (one setting for nearly all of the play), creating plenty of room for Boler's words to stretch out. This sparse setting brings the dialogue and character interaction front and center.

Betsy Butoryak shines as the titular character. Loud, obtuse, and acutely unaware of personal space, Butoryak's Mrs. Head runs the emotional gamut at a sprinter's pace for most of the play, looking for something to fill the void in life and give deeper meaning to the world around her.

Balancing such bombast, Cheryl Horton-Jong approaches Mrs. Witherspoon, who's awaiting the same bus as Mrs. Head, with subtle nuance, her micro-reactions relieving tension through laughter and creating it through awkward discomfort – sometimes in the same line. If the story is Mrs. Head's, Horton-Jong's Mrs. Witherspoon is the sage – sometimes frustrated – spiritual guide, advancing the plot with power and command of the entire stage.

Camille Jones, as the Young Woman (in an old[er] woman's play), enters mid-story, adding depth to the overall performance. Jones thrills in one of the play's best scenes, which features the outstandingly versatile John Stockhausen, who plays a drifter, a store clerk, a New Age boss, and more.

Undeniably, The Miserable Mrs. Head delights in the misery of our loneliness in a crowded world, banking many laughs along the way. But it's heartfelt, thought-provoking, and soul-stirring – through both pain and hilarity.

As the New Age employer, Stockhausen interviews Jones – who believes her having taught the dulcimer to Central American children during a working retreat reveals her uniqueness. Instead of being one out of many, the younger interviewee, Stockhausen notes, is one of many. Everyone boasts such exceptionality, Stockhausen's 21st century boss scoffs, as he offers her a job without definition – or defined hours – that begins as a three-month-long unpaid internship followed by three months at MW – otherwise known as minimum wage, as Jones's deflated young woman notes.

Undeniably, The Miserable Mrs. Head delights in the misery of our loneliness in a crowded world, banking many laughs along the way. But it is heartfelt, thought-provoking, and soul-stirring – through both pain and hilarity. An emotional rollercoaster, Boler's new work is most daring because it isn't afraid to laugh at communication breakdown, sadness, and isolation. If we're laughing, at least we're not ignoring; and if we're not ignoring, then we're connecting in this strange world filled with strange people.