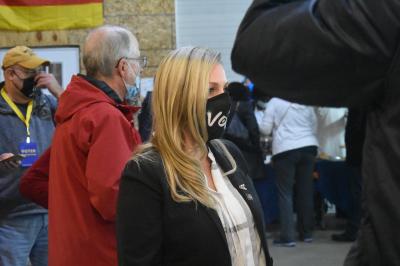 Tuesday night, Congressman Mike Kelly took the lead in his re-election bid over Kristy Gnibus before mail-in ballots were tallied. At the Democratic election party, many were anticipating a win for Kristy Gnibus for Pennsylvania's 16th Congressional District.

At last report*, Eriecountypa.gov shared their totals with Kelly winning at 56,557 votes, and Gnibus fell short with 42,523 votes in Erie County Alone. Gnibus got the majority of the mail-in votes at 13,065 to Kelly's 3,093.

*At the time of this writing, 19,158 mail-in and absentee ballots were reported out of anticipated valid ballots totaling 49,218.

Even with a massive influx of mail-in ballots from Erie County, PA's 16th district encompasses Crawford, Lawrence, Mercer County, as well as a portion of Butler County, Kelly's home territory.

Before the mail-in ballots were tallied, Kelly and other Republican representatives filed a lawsuit to challenge provisional ballots. According to Forbes, "Boockvar said Tuesday night identifying voters who have mail-in ballot defects is completely valid and there's nothing in Pa. law that prohibits that."

As for what's next, whether she wins or not, Gnibus said, "I'll be finishing my Ph.D., no matter what happens with the result. I have to focus on that." Her Daughters and mother were there, continuing to show their support through the night.

This morning Gnibus posted on her campaign's Facebook page, "This has been a hard-fought campaign- and while we did not get the results we hoped for, our fight for Western PA and our country is not over. We must come together to protect hardworking families, ensure that everyone has access to quality, affordable healthcare and that our kids and grandchildren receive the best educational opportunities. This campaign has been one of the greatest experiences of my life. I've had the opportunity to meet so many of you and hear your stories. Thank you to everyone who supported this campaign, everyone who opened their homes and hearts, and to the hundreds of volunteers who wrote postcards, made phone calls, and knocked on doors. We couldn't have done this without you."

The Chairman of the Democratic Party, Jim Wertz said, we will continue to push forward looking for the best candidates, but the fight's not over."

Simonique Dietz is a student intern of the Erie Reader. Feel free to reach her at Simonique@ErieReader.com, or you can follow her on Instagram @dietz_digital_pro.