Despite Big Plans On Deck, SeaWolves Season May Be In Hole 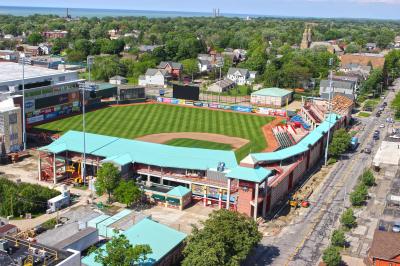 The lights will not go down on the SeaWolves City — at least anytime soon. However, the chances that the 2020 SeaWolves season — which has spent months in purgatory — will be played is quickly going to howl. The Reader recently reached out to SeaWolves Team President Greg Coleman for the latest update on an Erie summertime staple.

Matt Swanseger: All construction projects in the state of Pennsylvania were put on hold when Governor Tom Wolf's shutdown order went into effect March 16, not resuming until May 1. What is the adjusted timeline for the completion of the new SeaWolves team building?

Greg Coleman: With limited exceptions, such as landscaping and interior locker room work, we expect the project will be completed in late August.

MS: How likely is it that we will see baseball this year at this stage?

GC: MLB has been focused on finalizing a return-to-play plan for its 30 teams.  We do not expect an announcement about the MiLB season to be made until MLB has finalized its own plans.  I think we'll see MLB games because they have the broadcast revenues to make it work.  Minor League Baseball depends almost exclusively on revenues driven by in-stadium attendance.  Given the wide range of state and local restrictions, it's very unlikely that games will be played in all Minor League markets.  It's possible that select levels or leagues could play, and we'll have to wait to see how MLB decides to move forward with the Eastern League.

MS: Have you received any assurance from the MiLB and/or the Detroit Tigers that baseball will return to Erie, and for how long?

GC: The Detroit Tigers want to keep their Double-A affiliate in Erie, and their senior leadership has shared that desire with MLB officials.  We're confident that advocacy and education efforts by the SeaWolves, the Tigers, Erie Events, and government officials have been successful in preserving our affiliation.  MLB's talks with MiLB are expected to resume soon, and those negotiations will determine what the partnership will look like going forward.

MS: In the probable absence of baseball this year, have you guys discussed any plans for alternative uses/events for the park (to the extent they can be organized safely)?

GC: We've discussed a variety of alternate uses for UPMC Park including amateur baseball games, fundraisers, hourly batting cage rentals, movies on the video board, family campouts, and ballpark yoga.  We have to wait for functionality to be restored to the video board, concession stands, and restrooms, but those will be ready by late June.

Anything we plan needs to be safe and meet local and state guidelines.  Even once Erie County enters the Green Phase, we expect gatherings will be capped at 250 attendees for many more weeks.  The real balancing act for us is how to make limited capacity, socially-distanced events viable and attractive.  It's easy to add an event when we're already hosting 100 others, but this scenario is quite different.  We'll need to determine if the events under consideration will justify the start-up and ongoing operational costs.

For now, we're planning to go 18 months between SeaWolves games.  That's a difficult challenge, but it's one we'll endure with continued support from our fans and partners.