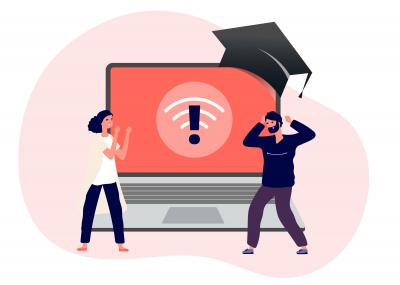 "New normal" seems to be the buzz phrase of 2020. It's a loaded phrase, to be sure, and it leaves us much to unpack. That's because normal — the old normal — wasn't working.

The COVID-19 pandemic exposed vast insecurities in our daily lives, from the fragility of our economy and the antiquated operations of commercial and educational enterprises, to the gross divide between the working class and those who don't worry much about hardship or hard knocks.

While the pandemic shed light on many fissures in our society, perhaps none was more equally distributed than the challenges facing education and the struggle to level the instructional playing field between students with access to the technological resources necessary to continue their coursework and those who lacked the tools, such as laptops or tablets, and access to broadband Internet connections.

The ParentsTogether Foundation, which publishes a website that provides research and a variety of support to parents and families on a range of topics including healthcare and education, published in May the results of a survey it conducted on access to online educational resources by household income. The results illustrate a vast divide in remote learning opportunities between households making less than $25,000 and those with household incomes greater than $100,000, and it has little to do with the quality of their schools.

Kids from low-income households were three times more likely not to have consistent access to an electronic device, the survey found. In some cases that was because the student had no device. But it was more likely that the student had to share a single device with other members of the household, including siblings who were also limited in their ability to access online educational resources or parents who needed the family's device to work from home. In households with incomes over $100,000, just eight percent reported needing to share a device. For families with household incomes less than $50,000 nearly half of the survey respondents reported that students in their home shared a device.

Given the range of household incomes among the survey's nearly 1,600 respondents, such results might be expected. However, many believe education to be the foundation of opportunity and expect that students within a single district or a single classroom share a common advantage. Unfortunately, the equity of school resources is limited to that which students have access to within the school itself. Once a student leaves the school, variables beyond the school's control become mitigating factors in a student's ability to academically achieve.

"That's what we're facing every day," says Andrew Pushchak, school board president of the Wattsburg Area School District and the head of the educational leadership program at Edinboro University. "Some districts are located in areas where 99 percent of the homes have broadband Internet access. Those schools pivoted on a Friday from face-to-face instruction to going online on Monday. We couldn't do that," says Pushchak.

Today over 90 percent of Americans have access to some form of broadband Internet — cable, DSL, satellite, fiber optic, or something else — according to a 2019 study by the Congressional Research Service. That number doesn't accurately describe the vast swaths of America with smaller populations that have no access to broadband Internet service providers or populations in both urban and rural communities with broadband Internet access but without the means to pay for service that is often overpriced as the result of industry monopolies nationwide.

The broadband divide is both economic and geographic in Erie County. A "Community Technology Action Plan" prepared in 2017 by the Northwest Pennsylvania Broadband Committee — composed of 29 organizations spanning business, education, and government throughout Northwest Pennsylvania — estimated that 99 percent of the geographic region north of I-90 had broadband access. South of I-90, just 25 percent of the region has broadband access. For those folks, mobile hotspots or satellite Internet service — both inferior alternatives to broadband — are the only option.

Then-Vice President Joe Biden came to Seneca High School in the Wattsburg Area School District in 2009 promoting a $7.2 billion funding package to expand rural broadband access that was part of the federal economic recovery act passed after the 2007-08 financial crisis. He was there because Wattsburg received broadband service in 2008 and was viewed as a model for rural access. To date, however, many of the boroughs and townships surrounding Wattsburg are still without broadband access because the expansion was left in the hands of private industry, for whom the return on investment was never large enough.

For school districts like Pushchak's, that complicated the response to pandemic school closings.

"We had to take the time to verify which households have Internet access and which ones don't, so that we could provide wireless hotspots to the families that needed access," says Pushchak. "If the kids are in the school, we've got them covered. Go a half-mile down the road and you've got nothing."

Pushchak's story is repeated in school districts throughout Erie County and across the country. And it's only scratching the surface of the old normal.

School administrators are taking great strides to ensure that students have the tools they need to be successful as we venture into the new, whatever that may be. But students will need a leveling of the broadband field to put those tools to work.

It's time for the federal government to do its part, just as it did in 1936. Because in a world of e-commerce and telehealth and every other promissory note written to those on the economic and geographic margins, the only thing that's normal are the promises of private industry that go unfulfilled.

From education to broadband access, normal is no longer good enough. Let's simply build it new.