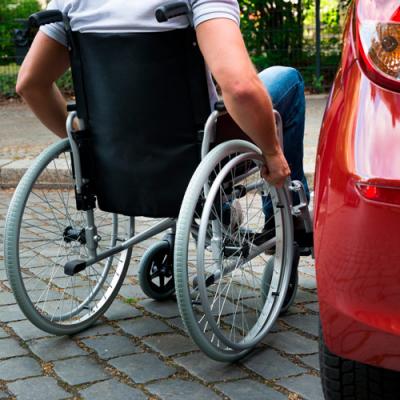 Last June, as the GOP unveiled one of its doomed attempts to repeal the Affordable Care Act, 43 protesters were arrested outside the office of Senate Majority Leader Mitch McConnell. The staged "die-in" was a response to the Trump administration's call for steep cuts to Medicaid, a government program that allows many people with disabilities to live independently. The protest was organized by ADAPT, a grassroots community working to "assure the civil and human rights of people with disabilities," according to their website.

The images from the protest were quite striking. Many were forcibly removed from wheelchairs in defense of a bill that was broadly unpopular and needlessly cruel. My own attempts at activism, consisting mostly of weekly calls to my congresspeople, seemed trivial by comparison. And the conversations my friends were having at the time – about Trump's handshake technique, Russian hackers, Nazi-punching, and Anthony "The Mooch" Scaramucci – struck me as especially ill-suited to the most urgent issues that face us.

The Pew Research Center recently estimated that 40 million U.S. citizens were living with a disability in 2015, including nearly half of those 75 or older. More than 20 million adults reported "serious difficulty walking or climbing stairs" and another 18 million found it difficult to do errands independently due to "physical, mental or emotional conditions." In the city of Erie, 16.1 percent of the population was living with a disability in 2015.

Even if the Affordable Care Act stands, the Senate's recent 2018 budget resolution is estimated to impose cuts of $473 billion in Medicare and $1.3 trillion in Medicaid over the next decade.

I'm not one of them. As an able-bodied person with decent benefits, it's tempting to assume that the Trump administration is too disorganized to pass any substantive legislation and go back to mocking his hairdo on the Internet. But even if the Affordable Care Act stands, the Senate's recent 2018 budget resolution is estimated to impose cuts of $473 billion in Medicare and $1.3 trillion in Medicaid over the next decade, according to the nonpartisan Center on Budget and Policy Priorities. The Kaiser Family Foundation estimates that more than 10 million people qualify for Medicaid on account of a disability, largely because their needs often correlate with poverty. These benefits provide for preventative resources, as well as the "long-term care services essential to the well-being of people with diverse disabilities and needs."

We've made progress on these issues in the past. In 1990, the George H.W. Bush administration passed the Americans with Disabilities Act (ADA), which required much needed upgrades to our sidewalks, buses, and businesses. As the country became more accessible, the act also spurred technological innovations like portable respirators and motorized wheelchairs. Living independently became plausible for people with disabilities, which decreased the need for long-term care in overburdened nursing homes. By 1999, the law was expanded to allow people with mental disabilities greater opportunities to live independently.

Some of these achievements are now in danger. Consider the proposed ADA Education and Reform Act of 2017, which would loosen regulations pertaining to Title III of the Americans with Disabilities Act. Title III allows people with disabilities to file lawsuits against businesses lacking reasonable accommodations. According to Senator Tammy Duckworth, who lost her legs in 2004 while serving in Iraq, the act would "allow businesses to wait until they are notified of their failure to meet legal obligations before they even have to start removing barriers that prevent Americans with disabilities from leading independent lives." Duckworth, in an op-ed for The Washington Post, argues that the legislation "would send a disgraceful message to Americans with disabilities that their civil rights are not worthy of strong enforcement."

Locally, people living with disabilities have resources to respond to these challenges. Voices for Independence, a nonprofit founded in 1993, advocates for accessible housing through partnerships with contractors and landlords, helps individuals looking to transition out of nursing homes, and provides attendant care to people living independently. The organization also employs several independent living specialists – most of whom live with disabilities themselves – to provide non-medical support in our community. They often deal with practical concerns like budgeting for fixed incomes and maintaining strong interpersonal relationships.

ADAPT, the organization that found many of its bravest members forcibly removed from Senator McConnell's office, is currently working to pass the Disability Integration Act, a bill with bipartisan support in Congress which would ensure that people living with disabilities cannot be forced into nursing facilities and related institutions. More specifically, the bill aims to protect the long-term services and supports authorized by Medicaid for people who need extensive care due to chronic illnesses and disabling conditions.

It's not terribly controversial to assert that people with disabilities have a right to live engaged and independent lives. But their needs are often drowned out in a media landscape that constantly bombards us with new causes for alarm. We might not all have the stamina to raise hell outside of a senator's office and risk arrest. But we can certainly work to insure that the ADA remains intact and that healthcare is affordable and accessible to those who need it most.