A darkly hilarious subversion of the genial Walt Disney persona, where Disney's innovation and peerless commitment to dream-building is actually the twisted realization of a man's hyper-enlarged ego 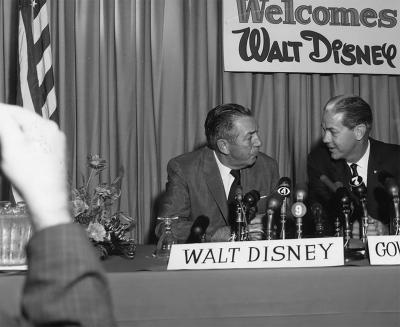 Florida Development Commission (public domain)
Walt Disney was quite proud of his accomplishments u2014 and hoped that you'd be too u2014 which will quickly become apparent in Dramashop's *Public Reading.

The musical Hamilton recently posed the question, "Who tells your story?"

In the case of writer Lucas Hnath's work: Walt Disney. In the script, America's hero — whose imagination spawned a massive multimedia conglomerate and who has served as the source of inspiration for countless "live your dream" posts on any even given Facebook feed — is nearing the end and would like to offer an opinion on how the world will remember him when he's gone.

So naturally, he's bringing his family on board — because who is closer than family? — to stage a public table reading of his autobiographical screenplay, a lament about how much everyone will miss him when he's gone. But when he's not interjecting stage cues or demanding that his daughter and her husband name one of their kids after him, he's chain-smoking and downing vodka.

The result, as Dramashop's production will show you, is A Public Reading of an Unproduced Screenplay About the Death of Walt Disney, a darkly hilarious subversion of the genial Walt Disney persona, where Disney's innovation and peerless commitment to dream-building is actually the twisted realization of a man's hyper-enlarged ego.

Part of the Dramashop's Staged Reading Series, potential attendees should be aware of its limited engagement — just four nights to catch this show — and the "pay what you can at the door" admission.

If theater has a way of weaving its spell and transporting you into another world, well, buckle in, because A Public Reading on the Dramashop stage is about to be the most magical damn place on earth. — Cara Suppa