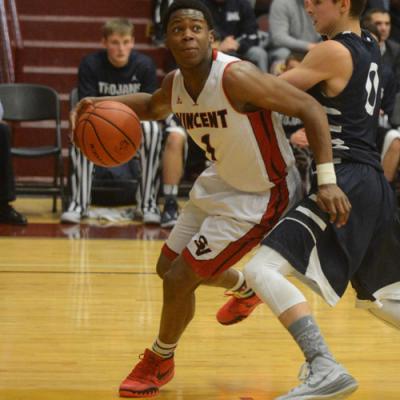 District 10 basketball playoffs have been a part of my life for nearly 60 years, and I have seen many incredible and exciting contests. However, the recent Triple A doubleheader at Edinboro's McComb Field House has to go down as one of the top evening ever. Talk about getting a bang for your buck – there wasn't anyone looking for a refund after viewing this scintillating action.

Many, many years ago – before McComb – most D10 games were held at Farrell High School, the mecca of high school basketball in the state at the time. And while it was exciting heading there (keep in mind there was no I-79 then), it's a lot of fun making a hop, skip, and a jump to the Boro.

Let's take a look at that exiting evening at McComb.

We can title this: "Remnants from a great high school twinbill!"

FOR THE RECORD – On the "Sports Blitz" Friday episode, I predicted Meadville by 10 points.

Both these teams were much better than I imagined; the two squads were extremely well-coached as well as very talented. I thought Meadville would have way too much quickness for Girard, but the Yellow Jackets matched the Bulldogs nearly step for step.

After watching the squads on the same court, there was no doubt they were evenly matched, and it was no fluke that the Jackets were in a position to claim the third spot in District 10 and extend their season. However, the Dogs came up with key plays when they were needed and claimed an extremely hard-fought success.

Coach Darren Mayes had his squad well-prepared, and they played a great first half, taking a 26-22 lead into the locker room at the intermission. Meadville picked up the pace defensively, outscoring Girard 14-8 in the third period for a two-point advantage entering the final session.

The Dogs dominated the early going of the fourth stanza, but the Jackets refused to buckle and actually had a chance to win at end of regulation, Dontae Williams' 18-footer caroming off the rim as time ran out.

Meadville controlled the action in the overtime, but Girard still had its chances before two free throws with 14 seconds left in the contest did them in and brought the final count to 58-54.

FOR THE RECORD – On the "Sports Blitz" Friday episode, I picked SV by eight points. CP had won the two regular season games, but the Colonels were close to assuming control late in both of those efforts before letting the win slip away. I thought they were due and there were several times in the championship game it appeared I was going to be correct, but the Ramblers refused to go away.

The Colonels controlled the action almost the entire way – actually they did control it the entire away.

SV had a seven-point lead a couple times in the first half and appeared ready to position themselves for a win in the third match between the two rivals. Prep, however, kept breaking through the rugged Vincent defense, just enough to stay within reach.

Coach Shannon Pullium's crew led 27-22 at the half and 31-25 after three quarters, setting up one of the most exciting finishes in the history of D-10 playoff basketball.

An ending that the crowd of 1,500 in attendance will be talking about for many, many years.

The Colonels led 35-30 with just over a minute to play, the Ramblers slicing the margin to a single point at 40-39 with 10 seconds to play and then immediately fouling. Unfortunately for Vincent, the Colonel player missed the front end of a one-and-one that left the large crowd roaring and on its collective feet for a thrilling final 10 ticks of the clock.

The Orange-and-Black rushed down the court and put up two shots, the second being blocked out of bounds with exactly one second showing on the clock. This set up a situation that ended up enabling 6-4 senior Charlie Fessler to go down as one of the all-time legends in Ramblers' cage lore.

Prep, looking for Matt Colpoys, Joe Fustine, or Carter Cross to receive the inbounds pass, were unable to find any of them open so the Rambler passer had to "settle" for the rugged Fessler who caught and shot, all in one motion. And Fessler, who is going to Northwestsern on a football scholarship and didn't play hoops last season, didn't disappoint as he sent the Rambler rooters into a frenzy, while breaking the hearts of the SV coaches, players, and fans when he hit nothing but net on a 15-foot baseline jump shot.

It was sheer pandemonium at McComb Field House as the Ramblers won a game – and a D-10 title – that appeared to be in the loss column moments earlier. As a matter of fact, Prep's only lead of the evening came after the final buzzer, the horn sounding while the ball was in the air and SV still in the lead at 40-39.

It was a brutal defeat for Coach Pullium and his squad but an amazing victory for Coach Mark Majewski's team that never quit.

QUICK PREVIEW – It's Never Too Early

It seems like a long way off, but let's take a quick look at next year's AAA playoff possibilities. The Triple-A Division will be loaded with plenty of outstanding underclassmen, and this is the way I would seed these squads if the same four make the finals.

1. STRONG VINCENT – There's no doubt SV should be a power both locally and in the state, Coach Pullium starting three 10th graders this season: David Morris (6-1), Simeal Wofford (5-10), and Bryon Williams (6-2).

Morris has superstar potential and could end up as the all-time leading scorer in Erie basketball history. Wofford and Williams have star capabilities themselves.

2. GIRARD – I was really impressed with the Yellow Jackets, and they will have a great inside game with Dontae Williams (6-5) and Chris Harbaugh (6-3) while sophomore Marcus Rickard (6-3) has great potential.

Coach Darren Mayes' team always play great defense, and he may turn this bunch loose a little more than usual.

3. MEADVILLE – The Bulldogs' leading scorer was just a sophomore, Armoni Foster (6-0) averaging over 17 PPG for a very good Meadville team. However, he isn't the lone top-performer coming back, as Jason Clune (6-4) is a 1,000-point scorer and Anthoni Boitnott (5-10), Roman Pero,(6-1), and Alec Byham played quality minutes.

Don't count the Dogs out.

4. CATHEDRAL PREP – The defending champion Ramblers will have the most holes to fill, but give Coach Mark Majewski some players that can shoot and handle the ball, and he always puts a potent team on the floor. Leading the way will be 6-1 sharpshooter Carter Cross – a great all-around athlete who has already accepted a baseball scholarship to Nebraska.

Dajon Heidleberg and Jeryn Simpson will give the Ramblers good play at the guard position while Majewski always seems to come up with some good players that didn't see much action in their junior years.