Donate and Laugh During All An Act's Run For Your Wife

Chase down the new comedy coming to All An Act 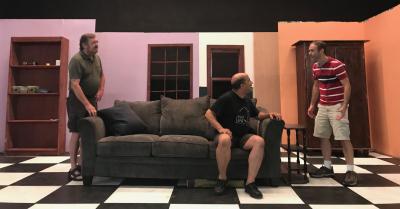 In times like these, laughter is a priceless commodity, and what could lift spirits more than the opportunity to give back while escaping with a bit of comedy? Fortunately, All An Act's upcoming production of Ray Cooney's Run For Your Wife is offering exactly that. For each ticket sold, one dollar will be donated to Community Shelter Services and Erie's Homeless.

This 1983 classic comedy centers around John Smith, a cab driver with a highly irregular work schedule. At first, Smith uses this schedule to his advantage, seeing two different wives in separate areas around London. But then, following a string of curious events involving a head injury and a photo in the paper, Smith must do everything in his power to keep his double life from being exposed.

Produced with special arrangements by Samuel French of New York, Run For Your Wife has long been lauded as a mile-a-minute comedy, with The New York Post on its "virtually continuous laughter" and one employee of WMCA Radio claiming, "I was exhausted from laughing so hard.

The play features Dave DiCola, Amy Welker Rowe, KC McCloskey, and many others alongside director Larry Lewis. Fans of productions such as Caught in the Net, Not Now, Darling!, and Two Into One ought to love the show considering they all carry over Cooney's unique sense of humor. With rave reviews and final performances in the mix, Run For Your Wife is bound to be one of the must-see shows of All An Act's 2018 season. — Aaron Mook