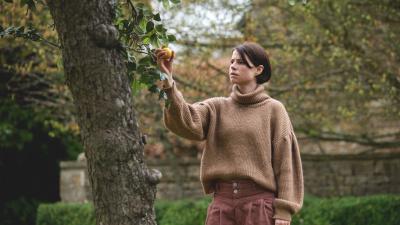 For the last decade or so, the term "elevated horror" has become more and more prominent in film discussion. Seen as the more highbrow, artistically adept contrast to the noisy jump-fests of mainstream horror, these films (often distributed through A24) have helped turn horror into a more respected subgenre. That said, it was only a matter of time before these films became derivative in their own right and Alex Garland's (Ex Machina, Annihilation, Devs) new film Men, despite some admirable filmmaking, often feels like a dozen other "horror as a metaphor for grief" tales that have come before it.

Harper Marlowe (Jessie Buckley) has moved to an idyllic house in the English countryside as a way to rebuild her life after her husband's apparent suicide. While settling in, she has several encounters with the various men of the village (all played by Rory Kinnear). As the days go by, these encounters go from strange to unnerving to horrifying.

On a technical level, the film is excellent. Garland's blocking makes great use of empty space, turning corridors and tunnels into places of foreboding dread and Buckley's performance sells the horror elements well. However, the story is too paper thin to really engage the audience. The plot and the setting are so shopworn that we feel like we've seen it all before, until the final 20 minutes when the film delves into pure abstraction. These elevated horror films at first felt like a breath of fresh air, but are now feeling as routine as the mainstream films they were contrasted against. How many times can we talk about grief before it gets repetitive? — Forest Taylor