Don't Stop Believin' in the Radness of 'Rock of Ages' 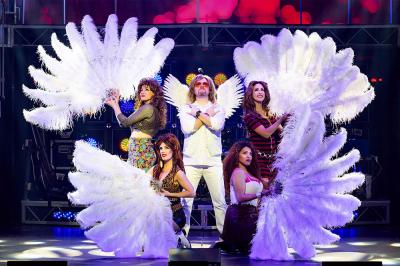 The 1980s were a time of excess — especially in the hair department — unlike any other, and nothing captured the wild ride that was the 20th century's penultimate decade like the rock music that blasted out of everyone's sweet stereos.

The creators of Rock of Ages know this. And it's no surprise that the hit jukebox musical, which debuted in Los Angeles in 2005, transitioned Off-Broadway in 2008, and premiered on Broadway in 2009 is the 29th longest running show in history, with multiple productions worldwide and two tours.

One tour, naturally, traverses the U.S., and lucky for Erie — this infectiously head- show is stopping in the 814 for a one-night-only engagement at the Warner Theatre.

Set in Hollywood at the height of the "sex, drugs and rock 'n' roll" lifestyle, the musical takes place in none other than a Sunset Strip club, where dreams can come true — or get shattered, depending on your luck.

With hits like "Here I Go Again," "I Want to Know What Love Is" and "Don't Stop Believin'," Rock of Ages is a raucous good time, though it may not be suitable for children under the age of 14. — Cara Suppa