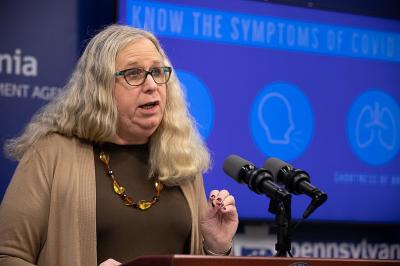 The nation's LGBTQ+ community celebrated a historic moment on Tuesday with the U.S. Senate's confirmation of Dr. Rachel Levine as assistant secretary of the U.S. Dept. of Health and Human Services, the first openly transgender official to achieve that feat.

Dr. Levine, a graduate of Harvard University and Tulane Medical School, specialized in pediatrics before serving as Pennsylvania's physician general and her subsequent appointment as the state's Secretary of Health under Governor Tom Wolf in 2017. She is also the president of the Association of State and Territorial Health Officials and a scholar of several health topics, having written papers on the opioid crisis, medical marijuana, eating disorders, and LGBTQ medicine, among others.

After coordinating Pennsylvania's COVID-19 response over the past year, she's poised to scale up those efforts under the Biden administration, which seeks to hit the ground running on an ambitious $1.9 trillion plan to muffle the pandemic and breathe life back into the national economy. The highlights of that plan include staffing mass vaccination centers with emergency personnel and the distribution of 100 million vaccinations in 100 days in order to make a significant stride toward herd immunity, and in turn something resembling normalcy.

Dr. Levine will team with incoming Health and Human Services Secretary Xavier Becerra, Coronavirus Response Coordinator Jeff Zients, CDC Director Rochelle Walensky, and Surgeon General Vivek Murthy to attempt to put an end to the current public health crisis. The crew will receive additional support from Marcella Nunez-Smith, a Yale epidemiologist who will advise on the fair and equitable distribution of the vaccine across demographics, and leading infectious disease expert Dr. Anthony Fauci.

Congratulations to Dr. Levine as she faces a very formidable task ahead.