Jordy the Traveler and Yeshuwa prepare to heat up the Erie Art Museum. 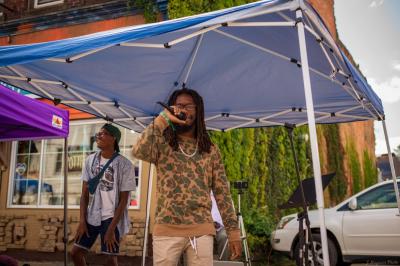 Jordy the Traveler and Yeshuwa prepare to heat up the Erie Art Museum during their "Open Late" performances.

This dynamic hip-hop duo has been close friends for over ten years now, having been spotted around town performing at other local venues such as Basement Transmissions, PACA and the Tipsy Bean.

For their first time at the Erie Art Museum, the two have goals of "spreading energy and good vibes throughout the crowd. They also speak of  "taking the crowd on a musical adventure in hopes of building our fanbase more than we already have been."

Jordy the Traveler is no stranger to the music scene as he has been performing on local stages for over two years and making music for a little over ten years. Along with the creation of his clothing brand 94 Eleven, he also is currently working on a new project titled, "The Story Continues," which will dig deep into his urban hip-hop vibes. "Bigger stages, tours, and changing lives" is something that Jordy strives for in his musical career.

Yeshuwa has just recently returned to the local music scene with his move from Arizona to Erie in March of this year. Although he has only been back in his hometown for a few months he has been making strides by teaming up with other local artists for performances and just recently coming out with a full album titled, "Blessed Vibes Only." He has also released prior music videos that display his World Soul genre of hip-hop music in action. As Yeshuwa continues to grow, he hopes to "strive towards the achievement of dreams and goals that were already thought of."

Both Jordy and Yeshuwa will have merchandise for sale, as well as the Art Museum providing the drinks and maybe even a pop-up workshop or two. So come and escape the cold by enjoying a night of art and music for everyone to enjoy. -Symoné Crockett