Earth Day turns 45 on April 22. How well are its original goals aging? 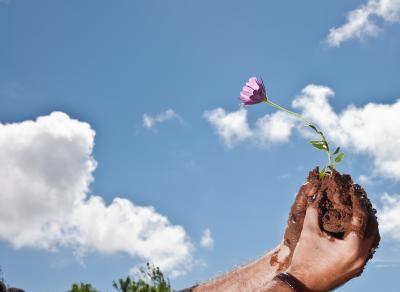 Today, Earth Day still spotlights "green" issues and the importance of loving our other Mother. Rallies energize the like-minded, staving off despair and alienation. Service events do likewise, while also accomplishing something worth doing. And even corporations, ever the opportunists, advertise deals on "eco-friendly" products: a practice that, while contradictory, at least acknowledges the consumer's role in sustainability.

But it's so easy to become self-congratulatory for holding a sign. Self-righteous for buying an organic t-shirt. Smug for using a reusable mug.

I should know. I'm no stranger to hypocrisy. I sold my truck. We installed solar panels. And then we flew twice last year. It's so hard to walk the walk, in a world hell-bent on running.

But what we humans often don't seem to realize — at least not fully — is that we are the earth. The earth is us. "Saving the planet" implies a separation that doesn't exist.

Whether we recognize it or not, we're constantly, inescapably dependent on this earth, because we're made of this earth. We are food the soil grew, water the lake held, air the trees purified, and vitality the sun radiated. We are wildness, freedom, and grandeur. We are spontaneity, and play, and steadiness, and storms.

We need recycling, cleanups, and bike-friendliness. We need to buy food and necessities based on their overall environmental impact. And we need Earth Day to remind us that politically polarized groups can unite to create positive change.

But mostly, we need to rediscover our essential kinship with nature. To look away from screens and up at skies.
Because if we think the earth is ours to save, we're missing the point. Really, it's the other way around.