The musical comedy offers the audience the opportunity to choose the culprit and thereby provides alternate endings for each character accused of the murder. 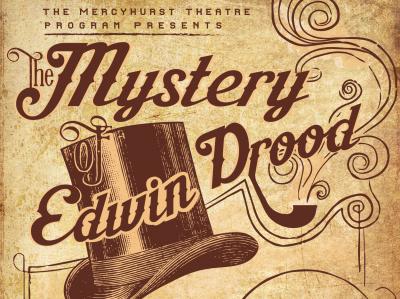 Attempting to solve one of world literature's most enduring mysteries–at least within the confines of Mercyhurst's Taylor Little Theatre–audiences at each performance will cast ballots regarding The Mystery of Edwin Drood.

A musical comedy written by Rupert Holmes, the rain-soaked singer behind "Escape (The Pina Colada Song)." Drood is adapted from Charles Dickens' final, albeit unfinished novel. Holmes offers the audience the opportunity to choose the culprit and thereby provides alternate endings for each character accused of the murder.

"Everyone on stage is a suspect in the murder of young Edwin Drood, and it's up to you to choose the killer! Is it John Jasper, Edwin's protective but slightly maniacal uncle? Rosa Bud, his reluctant betrothed? The debauched Princess Puffer? Each performance ends differently, depending on what the audience decides," baits the university's website.

"There's bickering and histrionics aplenty in Drood–and the audience determines the outcome in, what the master of ceremonies calls, "a daring and dangerously democratic move"– but the proceedings are devoid of the vitriol and mudslinging that has characterized this election season," said the show's director, Brett D. Johnson,  who's also director of the university's theatre program.

Drood was originally produced in 1985. It won five 1986 Tonys, including Best Musical, as well as Drama Desk and Edgar awards.

"I think this musical is ultimately about how fragile and precious each moment of life is," said Johnson. "We should make no assumptions about what the future may hold. In the last moments of the show, a character sings the following lyric: 'Is it clear? If you hear my voice, then you're alive. What a bloody marvel we survive when you think of every risk we face in our mad human race.' Simply surviving and savoring each moment of life is reason enough to go on," offered Johnson.