Win or lose, there's never been a jam the Eerie Roller Girls couldn't find their way out of. 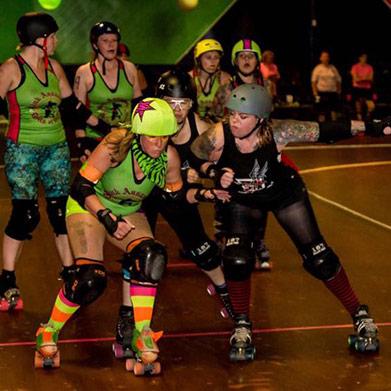 Win or lose, there's never been a jam the Eerie Roller Girls couldn't find their way out of.  However, obstacles remain – namely the pesky dollar, screening would-be newcomers from enjoying their sport. As empowered women are wont to do, the Roller Girls have taken the lead on this one, organizing an evening of music, games, and prizes at the Brewerie's Trackside Patio. Now they are asking you to be their pivot. The $5 price of admission will score you your first beer – and score the new recruits their requisite gear.

Gritty, fast-paced, and fun, roller derby is contested among an estimated 1,250 leagues worldwide. The game is predicated heavily on contact and even more so on personality, with players sporting colorful nicknames and vibrant uniforms. The premise is relatively simple: A jammer designated by each team tries to break through their opponent's pack of blockers (of which there are four). Whoever's designee gets through the traffic first becomes the lead jammer and is eligible to score a point each time she laps an opposing blocker. Each play session, or jam, lasts a maximum of two minutes. The lead jammer can end the jam earlier by tapping her hips twice.

This jam, however, is one you'll want to last. TomKat Black (acoustic guitarists Dan Blackman and Tom Morrison) will roll out tunes from the '60s through '90s, while indie quartet Pine Diary (vocalist Jess Royer, guitarist Nick Warren) skate through a soulful set of originals. The New Morning Sunrise, Hard Luck Story, and Jonathan Nolan will also grace the trackside stage. Passing this up would clearly be a point against you. — Matt Swanseger