Emily In Paris Gets Lost In Translation 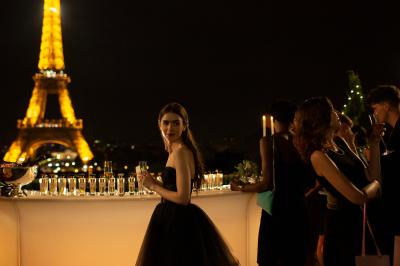 Set in the postcard-perfect Paris of a Francophile, Netflix's newest original show Emily in Paris feeds viewers cliché after cliché. Chocolate croissants? Check. Jaunty berets? Of course. Eiffel Tower money shot? Obviously. It's a story like many others. Enthusiastic Emily Cooper (Lily Collins) takes a job in France to act as the "American point of view" for a French luxury agency that has agreed to update marketing strategies. Through witty hashtags and cutesy social media campaigns, Cooper stumbles her way through trying to help her Devil Wears Prada-esque no-nonsense boss (Philippine Leroy-Beaulieu) and sassy coworkers (Samuel Arnold, Bruno Gouery).

Despite being a seemingly one-dimensional character, Cooper's supposed charisma and endearing foreignness help her make friends through serendipitous meetings on park benches, at cafes, and while shopping for flowers. As new friends Mindy Chen (Ashley Park) and Camille (Camille Razat) along with flirty Frenchman Gabriel (Lucas Bravo) help Cooper navigate Paris, it seems that this 20-something chose to forgo any prior research about where she was living for the next year before jetting out of Chicago. In fact, one of Cooper's biggest character traits throughout the series is knowing zero française and often finding herself in awkward situations because of her cluelessness (which would be ignorance, if Cooper hadn't been painfully painted as adorable and earnest).

Often compared to Sex and the City and Gossip Girl, Emily in Paris lacks the depth and complex characters that drive such long-lasting series. Yet, much like New York, Paris acts as a beautiful backdrop for Cooper to explore while fashionably overdressed, even for an American in Paris.

And while the social media angle is a relatable one, it only creates surface-level commentary on new-age technology among young people. Outside of her job as a social media strategist, Cooper documents her life to her growing Instagram account, @EmilyinParis, which captures her whirlwind of a life in France, where even stepping in dog poop becomes a post-able moment.

Despite bringing complexity to characters in past projects (To the Bone, Love Rosie), Collins performance as a flitty, workaholic millennial is nothing impressive. The real stars of the show are Cooper's trusty 5-inch heels that have yet to fail her on cobblestone streets. Marketed as a "drama-comedy," Emily in Paris falls flat as jokes are elementary and drama is resolved within 30-40 minutes. The show is light and moves quickly, streaming at under five hours in total. True escapism for the Parisian lovers and dreamers. — Hannah Wyman