Pedestrians in Chicago have a new way to look at their city. This experience would be equally intriguing in Erie. 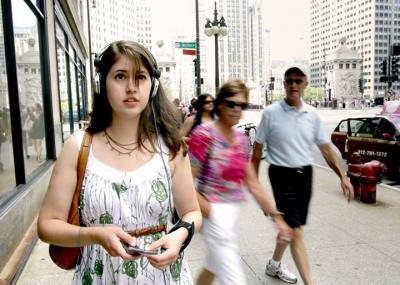 If you're taking an end of the summer jaunt this year, consider going to Chicago. It's been a few years since I've made tracks in the windy city, but I found a reason to return.

It's called En Route. It's an interactive art project from the Chicago Shakespeare Theater on Navy Pier by way of Australia. That's right. Australia.

The effort was generated by a group of Melbourne-based artists who crafted the work after receiving a grant for public art included in the 2012 London Olympics.

En Route is a spatial experiment, which "creates a place where the private and public, imaginary and concrete, intersect and overlap," according to the Chicago Shakespeare Theater website.

It works like this: participants receive headphones and a specially programmed Motoroloa ATRIX 4G that is preloaded with music from Chicago musicians and spoken word related to the experience, including passages from Dante's Inferno. You use your cell phone to receive text messaged directions explaining where to walk, look, write, and speak on your journey through the city.

The basic concept is that routine driven city dwellers will be given a new lens through which they can view their hometown, exploring places they may have been, but maybe never truly saw in this unique way.

In reading and watching the interactive experience online, I couldn't help but think what a tour of Erie might include. Imagine a "Scalisized" tour of the city, narrated with spoken word from the Poet's Hall, and a soundtrack by any number of Erie's deep pool of talented musicians.

You'd begin in the woods near the train tracks behind Union station, make your way through the alley behind the Plymouth and Chido's Dry Cleaner and eventually make your way to Dobbin's Landing where the sound of fireworks will close out your tour. It will be music to your ears.