Enjoy Songs for Old Souls with Alyssa Hankey at Lavery 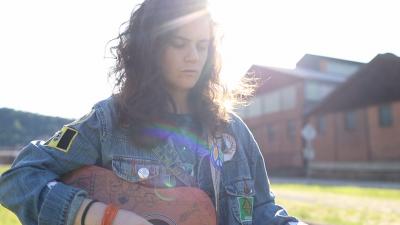 Alyssa Hankey is a singer-songwriter located just north of Pittsburgh, and it shows; her unique brand of Americana paints portraits of "steel mills" and "bucolic landscapes." Now, she's bringing her rural storytelling to Erie at Lavery Brewing Company. Here, audiences can expect a set comprised of songs influenced by the likes of Bruce Springsteen, Van Morrison, and John Mayer, among others.

As a young artist, Hankey chiseled away at her own sound throughout her teenage years. Her music is equally informed by her musical idols (which expand to include Bob Dylan, Led Zeppelin, and Chris Stapleton), her upbringing in western Pennsylvania, and her extensive grassroots traveling. Recently, Hankey has played in New York, New Jersey, West Virginia, Kentucky, North Carolina, and Tennessee, as well as Maine and Georgia as part of her recent American Spirit Tour and Westward Bound Tour 2018 with Corey Kurtz.

This touring follows the successful release of two albums within the last five years, 2016's Shadowlands and 2019's American Spirit. While audiences can likely expect to hear a little more from the latter, Hankey's two releases complement each other well. Her music appeals to a wide demographic, including the musicians of yesterday and current learners who feel they just weren't made for these times. Hankey makes music for old souls who want to hear something new, and if that isn't an achievement for a talented young songwriter, quite frankly, I'm not sure what is. — Aaron Mook