Two former Colonels have made the news, and we're pretty excited about it. 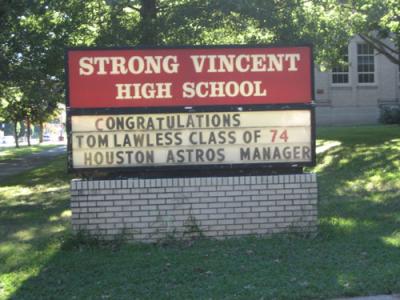 IT'S A GREAT time to be a Strong Vincent fan, or an Erie sports follower, as a couple of former Colonels are in the news, ex-Colonel baseball player and wrestler Tom Lawless and one of the greatest basketball players to ever come out of this town, "Easy" Essie Hollis.

Lawless, who graduated from SV in 1974, also starred at Penn State Behrend on the diamond before being drafted by the Toronto Blue Jays. He then went on to a career that saw him involved in some interesting moves, culminating with the ex-SV star being named interim manager of the Houston Astros, one of just 32 of those jobs available in the world.

It doesn't take a lot to give me goose bumps when an Erie athlete gains national attention, but Lawless has given me several thrills besides being named a Major League Baseball manager.

Try this one on for size: The former Colonel standout is the ONLY player ever traded for the great Pete Rose. That is correct. Throw that out as a trivia question when you're out enjoying a few cold ones, especially if it's not an Erie location.

Also, Lawless hit a game-winning home run for the St. Louis Cardinals in game four of the 1987 World Series. Ironically enough, the Erie native hit just two regular season round-trippers in his career and had hit a mere .080 in 25 at bats during the '87 regular season.

And another side note, on May 10, 1989, he broke up a no-hit effort by Mark Langston of the Seattle Mariners with a single.

Lawless was recently named interim manager of the Astros on Sept. 1 when Bo Porter was fired. Since then, Houston has played outstanding baseball and this could move the "Pride of Erie" to the head of the list for the permanent skipper.

Meanwhile, Hollis, arguably the greatest hoopster ever to play high school ball locally, will be honored on Oct. 23 at the Colony Banquet and Catering Hall, located at 3014 West 12th. The events of the evening will run from 8 p.m. to midnight, cost of tickets set at $15 per person and $25 per couple.

More information may be obtained by contacting SV basketball coach Shannon Pullium or Missy Whalen at 874.6500.

Hollis, who is one of my all-time favorite athletes, starred at St. Bonaventure University – leading the Bonnies to an NIT title – and played in the NBA. After his stint with the Detroit Pistons, the classy Hollis played in Europe where he became a national hero, achieving Michael Jordan-type status.

The SV star had plenty of great games, but my favorite came at McComb Field House when he lit up 6-foot-8 Richard Cotten of Pittsburgh Oliver High School for over 40 points while totally dominating the rebounding play. The Pittsburgh media predicted Hollis would be overwhelmed by the Duquesne recruit, but that was just another time the Pittsburgh people underestimated our athletes and our teams.

Thanks, Essie, for the great memories.

You don't have to be an SV fan to help honor this great athlete – and better person. You won't be able to keep me away.

"ELECTRIC" IS THE word I heard most often following the McDowell-Cathedral Prep football game played in front of nearly 9,000 fans at Erie Veterans Stadium, and that was a quote from CP faithful, McDowell followers, and just plain, old high school football fanatics.

The Ramblers won the hard-fought contest 24-10, but it was the scene inside causing the buzz, local fans singing the praise of the excitement of the total evening. I talked to many Erie fans that have been going to high school contests for 50 years or more and they all pointed out they don't remember a more exciting setting, from start to finish.

From starting with a great cause – as proceeds went to cancer research – to the student bodies, to the coaches and to the players, praise was heaped everywhere for the tremendous night for Erie football.

Many college students from local schools saw their first high school action at the Stadium – and while they may be a bit spoiled after that initial viewing, they admitted they were in shock at the intensity on display both teams. It was a night to remember.

Erie Reader Managing Editor Ben Speggen mentioned to me he had never viewed a high school football game in Erie, and I told him the McDowell-CP contest may be a good one for his initial effort. If the Carmichaels native took my advice, I bet it's safe to say he walked away impressed.

The game went down to the wire and followers of both squads had to be happy, the McDowell fans pleased with the team and first-year coach Brad Orlando, while the CP faithful thrilled to grab a hard-earned win without throwing a pass in the second half. Once again, Rambler boss Mike Mischler showed he is a great coach no matter what the circumstances are.

If CP gets the passing game in order – which they should – the Orange and Black will be hard to beat, as they will combine that with a crushing running attack, a style that pleases Mischler immensely.

By the way, Central Tech was my surprise team of the year before the season started and the Falcons have not let me down. Coach Rob Matz takes his team to Dollinger Field soon for a showdown with Prep, and this will be a real test to see how many people the 12th and Cherry facility will handle.

It should be a great evening.