A Burger King classic for the history books. 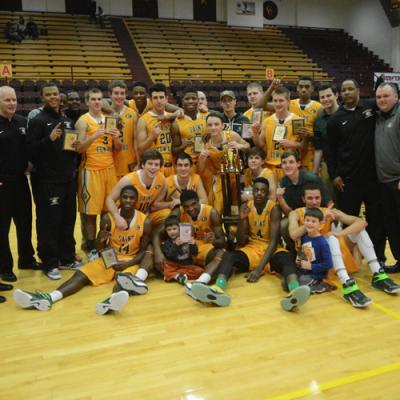 It was a great year for basketball fans locally, as cage enthusiasts were able to view some of the best teams as well as individual players at both the high school and college levels. It was definitely an exceptional season to be a hoops follower, as many of the top squads in the country made appearances in our great city.

The Erie Reader is ready to take you on that retrospective journey, and we hope you enjoy it this time as much as you did the first trip.

The BK Classic is always one of the highlights for high school faithful, and I will throw some facts out there for you to let you be the judge of the caliber of this year's event, the 32nd annual extravaganza.

For example, many times in the world of professional sports, it's fashionable to say after a trade: "It's too early to tell if this was a good trade. We won't be able to see for a few years." Also, "Fans will have to wait a couple seasons to see if the draft was a success for their team," is another popular sports' refrain.

POPE JOHN XIII – The Lions arrived in Erie ranked among the Top 10 teams in the country and left with a 1-1 record after losing to Cleveland St. Edward's in the opening session and then pounding host Cathedral Prep in the consolation game.

PJ XIII showcased six players getting Division offers, including 6-9 Moustapha Diagne, who was already committed to Syracuse. Also, 6-3 Matt Zignorski was a Fordham commit while 6-8 Jeremy Rodriguez had offers from a half-dozen D-I schools, with St. Bonaventure and Niagara in the lead for his services. Meanwhile 6-4 guard James Scott, just a junior, had offers from East Carolina and Fairfield already.

The Lions finished the season with an overall mark of 29-4, while ending second in the highly-competitive New Jersey State Championship race.

CONSTITUTION – This was a typical Philadelphia team (which means they were very, very good) that featured a roster loaded with plenty of height and outstanding guard play. The Generals were also the defending PIAA Class AA state champions.

The Philly squad was paced by 6-7 Ahmad Gilbert, who was committed to George Mason when he showed up in Erie, but has reopened his recruitment and is one of the most sought after players in the East. The Generals also showcased 6-1 sophomore point guard Kimar Williams, who is rated one of the top sophomores in the country.

Williams hit a three-point shot from 35-feet at the end of regulation to tie the championship contest, Constitution then losing, 70-63, in overtime to St. Ed's.

This powerhouse went on to win the Class AA state title with a resounding 85-53 win over powerful Farrell in the championship tilt, the Generals ending the season with a 25-8 record while playing some of the top teams in the country.

ST. EDWARD – Making their fifth appearance in the BK Classic, the Eagles of Cleveland captured their third crown after outlasting Constitution in the title match, St. Ed's outscoring the Generals 13-6 in the extra session to claim the win in front of a large crowd.

The Eagles, who were the big-school Ohio winners last season, came into town with a pair of All-American candidates leading the way, 6-6 senior Kipper Nichols and 6-9 junior Derek Funderburk, two of the more heralded performers to show their wares at the Hammermill center. The duo had already combined for more than 50 Division I offers midway through the season.

Check out Funderburk's list, as the likes of Indiana, Iowa, Ohio State, Penn State, and Xavier were already on board with offers, while Nichols was being courted by such schools as Maryland, Minnesota, Nebraska, and Xavier.

Nichols starred in the championship contest as he finished the evening with 21 points and four rebounds, Funderburk chipping in with a double-double, 11 points and 10 boards.

The Ohio power failed to defend its title, losing in OT in the semi-finals to a team that easily went on to win the state crown.

The Eagles finished the season with an overall mark of 21-6 against a national schedule.

CATHEDRAL PREP – The host Ramblers actually entered the tourney as the lone undefeated team, Coach Mark Majewski's crew showcasing an 11-0 card before losing their two outings in the Classic. Prep's best performance was a 61-56 setback to Constitution in the opening night affair.

However, the competition the Orange and Black faced in the BK event paid off in the long run, as the Ramblers were one of the surprise teams in the state in the post-season. They battled their way to a state semi-final appearance before bowing to powerful Archbishop Carroll of Philadelphia, the Burger King winners last season.

Personally, I don't think it will take a few years for high school fans to rate the 2014-15 Classic, as they witnessed a state champ, three teams that went to their states Final Four, and some of the best individual talent in the country. I'm guessing, most of those in attendance would grade it a solid A.

The situation was no different on the college level as the collegiate fans saw some of the best as the PSAC nearly swept national honors, winning the women's championship and just missing on the men's side.

CALIFORNIA (PA) – Local fans saw the "Best of the Best," as the PSAC West winner won the NCAA Division II national championship by beating California Baptists in the national finals, the second time the Vulcans earned a national crown.

However, Erie's Gannon University had the distinction of topping the champs twice in their three meetings, the Lady Knights posting 71-63 and 69-63 (OT) triumphs in the regular season before losing 66-53 in the PSAC Tournament. This just shows how close Gannon was to being a national contender.

It also shows how rugged the PSAC West was – and is.

Cal finished the season with a scintillating 32-4 record.

INDIANA (PA) – IUP nearly made it a PSAC sweep, the Crimson Hawks finally losing on national television to Florida Southern, 77-62, in the title tilt. That setback gave Indiana a final chart of 31-7.

However, local fans saw a couple of their favorites match up well with the Hawks, as both Mercyhurst and Gannon won two-of-tree from the powerful IUP squad.

The Lakers swept the regular season series with 65-62 and 58-55 victories, IUP coming back to eliminate the Hurst in the PSAC Tournament by a 67-54 margin. GU split a pair of regular season contests, emerging victorious 61-56 at the Hammermill center and then bowing 64-54 on the road.

The Knights then won the PSAC championship in one of the most memorable games ever played at the Mill, when Girbran Smith sank a three-pointer at the buzzer to give his team the 69-66 victory.

As we pointed out earlier, it was a tremendous season to be a local basketball fans and the statistics certainly back that up.