ER Sports: The Good, the Bad, and the Ugly Interviews

With 40 years of interviewing experience, James LeCorchick goes back and recalls the good ones, the bad ones, and the just plain ugly ones. 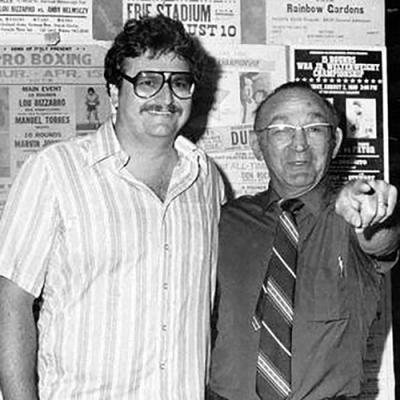 I was talking to some friends the other night and they started questioning who I have met and/or interviewed in my more than 40 years of covering sports, and it got me to thinking – actually thinking it would be a good subject for an Erie Reader article; I hope you agree with me.

I thought I would name the column The Good, The Bad (some not too bad), and The Ugly. Let me explain: you have to have been a real jerk to make The Ugly category.

CARMEN BASILIO – A winner of world championships in two different weight divisions, Basilio was one of my all-time favorites – by far.

He was in Erie representing Genesee Beer, and I jumped at the chance to have him in the studio when offered. He stayed for two hours and was incredibly entertaining.

JERRY FAUST – Two days after he was named the head football coach at the University of Notre Dame, I called him and he agreed to come on the show. There was a mix-up the evening he was supposed to call in, but he called the show the very next day on his own. As a matter of fact, he called from a pay phone from a country club in Michigan, where he was being honored by an ND group, and stayed on the air for 15 minutes with me. I have never forgotten that.

DIGGER PHELPS – Interviewed him while cruising Lake Erie on a boat, and the ND basketball coach was fun. I had no problem getting him to talk about himself.

BOB DIBIASIO – Whatever the Cleveland Indians are paying their Vice-President it isn't enough. His passion for the Indians is amazing, and in the 35 years I have been dealing with him, he has never turned a chance to talk to baseball fans in Erie.

STEVE BLASS / LANNY FRATTARE – I can say the same thing about this duo that I said about DiBiasio, except they are talking, "Bucco Baseball."

I was always welcome in the booth with them when I went to Pirate games. Blass is hysterical.

MIKE BREY – I called the current Notre Dame coach a week after he accepted his position with the Fighting Irish, and he gladly came on my radio show. He was excellent.

FLOYD PATTERSON – The former heavyweight champion was in Erie for an exhibition and was staying at the Downtown Holiday Inn. I called and asked if we could talk and he told me to meet him in the dining room. He was almost a bit on the shy side, but we chatted for nearly two hours and he was a great. There's no doubt he is a true gentleman.

JOHNNY LATTNER – I was doing a show from Art Arkelian's Sports Banquet and the Heisman Trophy winner from Notre Dame agreed to come on for an interview. You never know what you're going to get in this situation, but what I got was one of the classiest people I ever interviewed. He thanked me 10 times for having him on the radio.

DWIGHT WHITE – He showed up unannounced one night at my studio and threw quite a scare into me. This Steelers great filled the doorway to the studio as he announced, "I'm Dwight White from the Pittsburgh Steelers, and I heard what you said about the team." I was on the verge of passing out when I saw my good friend Fred Rush laughing hysterically behind him. White was one of my favorite interviews ever.

BERNIE CARBO – There was a time when I thought the former Major League Baseball player would be on my all-time ugly team, but he won me over. He, also, was in Erie for the Sports Banquet and made a total fool of himself, but he took the opportunity to apologize to the local sports' fans during a phone interview I had with him. He called in from the Pirates' clubhouse and was definitely sincere.

"CLASSIE" FREDDIE BLASSIE – The man who coined the term "Pencil Neck Geek" was one of my favorites, the pro wrestler was pure entertainment whenever he called in. And he called in at least a dozen times.

[Editor's Note: Let the record show these aren't necessarily "bad" people; they just were bad interviews. Of course some of them did almost make the Ugly list – again, reserved for total jerks.]

BOB FELLER – Wow! Being an Indians fan, it's hard to put this Hall of Famer first, but what an attitude he had.

He called in earlier than agreed to and then demanded to be put on the air immediately. I told him, "Thanks, but no thanks. I am going to just let you go." He finally calmed down and went on with the interview as scheduled.

It's really hard to put into words how impressed he was with his importance.

JAY BILAS – He's very good as a college basketball analysis, but as a phone interview in Erie, the ex-Duke player he was a total dud. He was paid very well to be a speaker for Mercyhurst University but didn't seem to be too happy that he had to take some time to help promote the event. He kind of personified the image of an "Arrogant Dukie."

DAVID WOLF – It's a long story how the former editor of Life Magazine ended up in my studio, but I was thrilled when I found out who he was. He wrote one the best sports books of all time, Foul, a story of Connie Hawkins. He was a great writer, but when I put him on the air I found out he was a horrible talker.

JACK LAMBERT – I heard from this Steelers Hall of Famer's teammates that he was a "bad" drunk. I spoke at a banquet he was also speaking at, and let me say: That was the best scouting report I ever heard.

REX CALDWELL – This one-time PGA tourney winner – he acted as if he was a 20-time winner on the tour – was one of the most obnoxious athletes I have ever been around. I was forced to ride in the same car with him when the Greater Erie Charity Golf Classic was held at Lake Shore Country Club. It seemed as if the trip from Lake Shore to downtown Erie would never end.

FRANCO HARRIS – As a favor, I picked Harris up at the Erie Airport and gave him a ride to Union City (that is correct) for a football camp being put on by his good friend and former Penn State teammate Charles Pittman. He was disgusted from the beginning and wasn't afraid to show it. I told Charles to get someone else to drive him back.

[Editor's note: Both of these meetings took place in the visitors' locker room at old Municipal Stadium in Cleveland.]

RICK BURLESON – They called this Red Sox shortstop "The Rooster" and I hated this rooster from the time I met him. I'm embarrassed (not really) to admit how happy I was when he suffered a career-ending injury. What a jerk!

PETE VUCKOVICH – By far, this Cy Young Award winner is heads and shoulders above all, the most arrogant athlete I ever ran into – and I didn't even want to talk to him.

I was working at a radio station when I told my friend Butch Nemenz, the station manager, that I was going to the Blue Jays-Indians game the following day, and he badgered me into looking up his buddy "Vukie."

I never liked going into locker rooms, but I let him talk me into looking up his former teammate at Clarion University. I introduced myself to him, and it was all downhill from there. Let me just say more that than half the words are deemed unprintable in a newspaper. And this is before he ever did anything. I can honestly say, "He makes me sick and flat out nauseous." The best description is total moron!