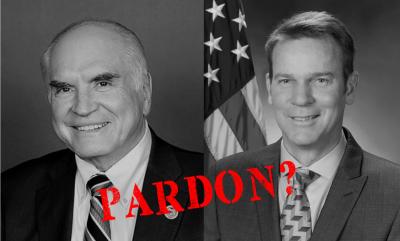 A congressman and a state senator walk into a bar. The bartender says, "what can I get you?"

"Pardon me," they reply in unison.

"What do you need?" the bartender impatiently asks.

This joke isn't funny on multiple levels. But perhaps the least humorous thing about it is the truth.

That's because Northwest Pennsylvania's congressional representative, Mike Kelly, and Erie County's state senator, Dan Laughlin, both found their way onto Donald Trump's pardon request list for their roles in attempting to overturn election results in 2020 – when, by the way, both men were re-elected. It's among the many revelations of the January 6 Commission and the details that have emerged during the commission's recent public hearings.

Their actions contributed to the January 6 insurrection on the United States Capitol and their efforts continue to undermine American democracy and the democratic process.

In other words, if Kelly and Laughlin, in support of this un-American Republican strategy, get their way, the state legislature and the U.S. Congress could invalidate your vote when it doesn't reflect the will of the Republican Party.

It started like this: Pennsylvania lawmakers, in a bipartisan majority, passed an election reform bill in 2019 called Act 77, which authorized the use of mail-in ballots. It was celebrated as a victory for Pennsylvania because it expanded access to the ballot and made our commonwealth one of 35 states offering voters the option of voting by mail. Seems simple enough.

But when the COVID-19 pandemic hit, every state searched for ways to allow people to vote safely and securely in the 2020 primary election and Act 77 gave that to Pennsylvania voters.

For the primary election in June 2020, despite a few operational delays because of the new processes put in place with Act 77 and the volume of votes cast by mail because of the pandemic, no legal challenges were made.

In November, mail-in ballots remained an option for voters as COVID-19 raged on, and record numbers of voters participated in the presidential election, when voters also elected members of congress, members of the Pennsylvania state house, and members in odd numbered districts of the state senate.

As we know, Joe Biden won both the popular vote and the electoral college, and for the purposes of this conversation, Congressman Mike Kelly and State Senator Dan Laughlin both won re-election.

Within days of the November election, in the wake of Trump's loss, Kelly filed his first lawsuit in an attempt to overturn the results of the 2020 election by invalidating all Pennsylvania mail-in ballots, which were cast overwhelmingly in support of Joe Biden.

The Pennsylvania Supreme Court unanimously rejected Kelly's claim. Even two Republican justices who partially dissented in Kelly v. Pennsylvania said that Kelly's claim was "extreme and untenable" because voters had relied on mail ballots "in too much good faith."

Kelly took his case to the United States Supreme Court just before Pennsylvania ballots were to be certified in December, but the High Court declined to hear this argument and Pennsylvania votes remained intact.

When that coup failed, Kelly joined a Texas lawsuit in which the State of Texas sought to overturn the election results in Pennsylvania, Michigan, Wisconsin, and Georgia by repeating the many false, disputed, and unsubstantiated claims of voter fraud in these states that had voted for Donald Trump in 2016 but elected Joe Biden in 2020.

Seventeen Republican attorneys general, representing their states, signed on to the Texas lawsuit.

In a tweet quoted by the Associated Press, University of California-Irvine law professor Rick Hasen concluded, "we are in bad shape as a country that 17 states could support this shameful, anti-American filing."

In addition to these Attorneys General, Kelly and 124 of his congressional colleagues filed an amicus brief with the Supreme Court in support of Texas.

An amicus brief, also known as a "friend of the Court" filing, is intended to provide additional information from a person or group "with a strong interest in the case...intending to influence the Court's decision," according to the Cornell Law School Legal Information Institute.

In Texas, Kelly and his co-conspirators asked the Court to affirm a state legislatures' powers to select so-called electors – those casting a state's votes in the electoral college. In this case, had the Supreme Court sided with Texas, it would have allowed the states in question to submit "alternate electors" to cast votes in the Electoral College for Donald Trump even though he lost the 2020 election in each of those states.

"The Framers of the United States Constitution provided that presidential electors be appointed in a manner directed by the state Legislature[s]," they argued.

In their bastardization of Article II of the United States Constitution, they concluded that no authority – not governors, courts, or any other entity – can usurp the power of the state legislatures to do as they please in the selection of electors.

Another amicus brief was filed by Republican members of the Pennsylvania Senate, led on behalf of the Trump campaign by Republican gubernatorial candidate Doug Mastriano and co-signed by Erie's Senator Dan Laughlin and 22 other Republican state senators.

The Republican senators brief reads, in part, "Certain select Pennsylvania State Senators bring this brief as Amici Curiae in support of their authority as a legislative body under the U.S. Constitution...The General Assembly, as the legislature of Pennsylvania, is given authority to prescribe the 'Times, Places, and Manner of holding elections' under Article I, § 4, cl. 1 of the U.S. Constitution."

Note that the state legislatures in Pennsylvania, Wisconsin, Michigan, and Georgia are all Republican-controlled and it is extremely unlikely that the balance of power will change anytime soon.

Laughlin claimed in local media reports and in an op-ed published by the Erie Times-News that the intent of the amicus brief he signed was not intended to overturn the outcome of the 2020 election.

But let's refer back to the definition provided above. An amicus brief is "intending to influence the Court's decision" in the case that the brief is filed. And had this conservative majority Court sided with Texas against four other states over which Texas has no jurisdiction, the election would have been overturned and 2.5 million Pennsylvania voters – Republican and Democrat – would have been disenfranchised.

Moreover, evidence presented in the January 6 hearings makes it clear that the amicus briefs submitted in the Texas case – Kelly's, Laughlin's, and others – were filed with insidious intent to illegally reverse the outcome of the 2020 election.

In the fourth January 6 hearing on June 21, the committee introduced an email from Alabama congressman Mo Brooks to Trump's executive assistant at the White House, Molly Michael, requesting a "general pardon" for "Every Republican who signed the Amicus brief in the Texas lawsuit against the other states deriving from their violation of Article I, Section 4 (and, perhaps, other) provision of the United States Constitution" and "Every Congressman and Senator who voted to reject the electoral college vote submissions of Arizona and Pennsylvania." The email is dated January 11, 2021, just five days after the January 6 insurrection.

Brooks' pardon request – and as we now know there were many others made directly to Trump and to his outside counsel, Rudy Guilianni – is unique because it is a preemptive pardon without any charges filed and even before any investigation of the January 6 insurrection or the attempts by Trump loyalists to subvert the election. A general pardon, like that granted to Richard Nixon, is an amnesty for past offenses.

Therefore, Brooks's request appears to be made on behalf of actors who are known to have taken part in a grand conspiracy to overthrow the federal government and the will of the people before they can be held accountable for their actions.

The Brooks letter came just days before we learned from Republican Wisconsin Senator Ron Johnson that a slate of electors his office tried to deliver to then-Vice President Mike Pence originated in Kelly's office. Kelly has denied the claims, but his blind loyalty to Trump since the runup to the 2016 election and his perpetuation of Q-Anon inspired conspiracies since taking office in 2011 provide us, and perhaps the January 6 committee, with plenty of credence for  Johnson's claim.

What is undeniable is that no Republican official – even the most publicly level-headed of them – are beyond reproach when it comes to the threat facing American democracy. The party that once positioned itself as the defender of existential threats to our way of life has become the primary existential threat to the American way of life.

Perhaps that's why they're so intent on stealing that too.

Jim Wertz is a contributing editor and Chairman of the Erie County Democratic Party. He can be reached at jWertz@eriereader.com and you can follow him on Twitter @jim_wertz.