Erie at Large: City Government Insists on Taking EMTA for a Ride

Can the struggle for power in local government take a break so that change can be achieved? 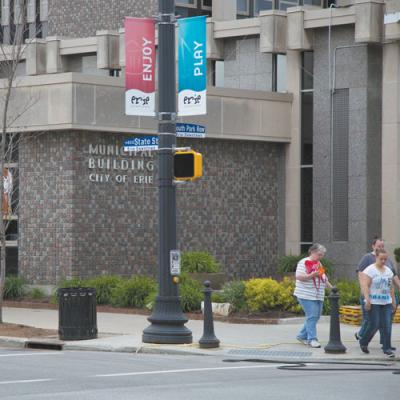 A few years ago State Rep. Thomas Caltagirone (D-Berks County) proposed legislation that would have radically changed the shape of government across the Commonwealth. His bill would have initiated the process to amend the state constitution to allow Pennsylvania's 67 counties to absorb more than 2,400 cities, boroughs, and myriad municipalities. It was pitched as a cost saving measure, an effort to reduce the redundancies of local government and to centralize taxation and administration. It was pragmatic, but absurd.

While absorbing municipal governments makes cents, the long-term benefits of such a plan may not be significant enough to endure the immediate short-term effects – primarily the loss of family-sustaining municipal jobs and the identity crisis such a move would cause within the state's mid-sized urban centers, like our fair Gem City.

This particular debate is long past, but it came to mind in recent weeks as the topic of shared control of regional assets, like the Erie Metropolitan Transit Authority (EMTA) and representative government within the city, emerged in public dialogue. These conversations need to be had, but not without remembering that there's always someone waiting off-stage to propose a nuclear option.

It seems that Barry Grossman was ahead of his time (or perhaps, more accurately, on time) a decade ago – between his failed run for Mayor of Erie and his successful bid for County Executive – when he led the charge for regionalization and the creation of a publicly-elected commission to establish a timeline for consolidating regional assets. Grossman's most vociferous opponents adopted the rhetoric of autonomy to position the anti-regional challenge.

Many of those same arguments were levied when Erie County Council rejected the renewal of the EMTA charter on June 18. The life of the charter is 50 years and is set to expire next September. City Council rubber-stamped the charter renewal and it expected County Council to do the same.

At issue is the fact that the city holds a disproportionate number of seats on the EMTA board and County Council would like to see the board matrix more accurately reflect the transit authority's service area. Moreover, Erie County is subsidizing EMTA at a rate greater than eight times that of the City of Erie.

At issue is the fact that the city holds a disproportionate number of seats on the EMTA board and County Council would like to see the board matrix more accurately reflect the transit authority's service area.

The Mayor claims that the seats belong with the city because of the volume of ridership in the city compared to that in the county, even as EMTA continues to expand coverage to outlying areas. Better the EMTA board reflect its coverage area so that it can best serve its riders. And shouldn't the ridership of EMTA dictate operational schedules and the scope of service to any one area?

There's a meta-pattern occurring within city operations that's borderline pathological. It's an attempt by city officials to demonstrate relevance and authority at a time when the preponderance of evidence suggests they hold neither. Both the EMTA board positions and the geographic mix of city council members are more about the consolidation of power than about doing what's best for the region. City government seems to hold the paternalistic viewpoint that only it can save the region. Let's hope that bus hasn't left the station.