Erie At Large: Fishing for free riders: unions after Friedrichs.

Friedrichs v. California Teachers Association, the Court was asked to consider whether or not union fees, known as "fair share" or "agency" fees, violate the First Amendment. 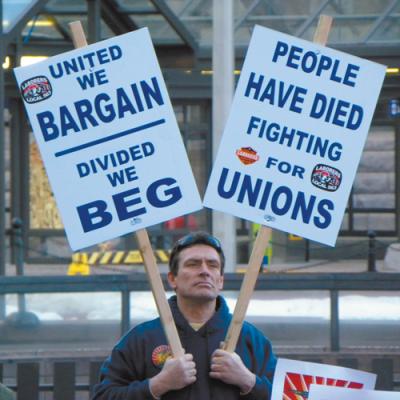 Erie is a union town. Despite neo-conservative attempts to destroy unions over the past 50 years and neo-liberal attempts to dismantle unions with corporate-friendly regulatory practices and trade policies, the Erie region – for the most part – has remained union strong.

All told, there are 252 AFL-CIO affiliated unions representing more than 45,000 people in the 19 counties that comprise the Northwest Pennsylvania Area Labor Federation. Couple them with the Service Employees International Union (SEIU) members and Teamsters, both of which disaffiliated with the AFL-CIO in 2005, and you've got something akin to a movement on your hands.

The success of the labor movement in northwest Pennsylvania is due in large part to the abundance of public sector unions that represent the region's teachers, law enforcement, and firefighters, as well as clerical and professional staffs in municipal and county governments and affiliated entities. But those public sector unions are often subject to heightened scrutiny by pundits and the general public because members are paid with tax dollars. This issue is at the heart of a recently argued Supreme Court case that may radically alter the shape and size of public sector unions across the nation and right here in NWPA.

In Friedrichs v. California Teachers Association, the Court was asked to consider whether or not union fees, known as "fair share" or "agency" fees, violate the First Amendment. These are fees paid by employees who are covered by the collective bargaining agreement negotiated between the union and the employer even though that employee has chosen to opt out of union membership.

If you're not familiar with collective bargaining, it sounds overcomplicated. But it's not.

Rebecca Friedrichs was one of several public school teachers in California who chose not to join the California Teachers Association. Even though she and her colleagues didn't join the union, they were still required to pay a "fair share" fee, which amounts to a percentage of full union dues based on how much time the union spends on matters related only to collective bargaining, but not to the union's political activities.

Fair share fees were implemented because the union is still required to represent non-member employees who would otherwise be covered by the collective bargaining agreement. In other words, if Friedrichs were fired without just cause, the union would still be required to defend her.

Fair share fees were implemented because the union is still required to represent non-member employees who would otherwise be covered by the collective bargaining agreement. In other words, if Friedrichs were fired without just cause, the union would still be required to defend her.

Fair share fees were the outcome of the Supreme Court's 1977 decision in Abood v. Detroit Board of Education, which established that unions had the right to collect fees related to their cost of doing business on behalf of members and non-members covered under the contract. The non-members are referred to as "fair share" employees or more commonly called "free riders" in union parlance because they reap the benefits of union membership without paying union dues.

In Friedrichs, the teachers' attorneys argued before the Court that union membership and collective bargaining on behalf of public employees are inherently political acts because they are tied to tax dollars collected as a matter of political policy. Therefore, non-members should not be required to pay a fee for union services.

Pennsylvania remains one of 22 states that still allows fair share payments. For now.

Public sector unions across Pa. are in the process of attempting to figure out what union membership in a post-Friedrichs world will look like. That's because in most cases, fair share payments amount to approximately 90 percent of full union dues. You have to be an ideologue or an asshole to opt out of full union membership when faced with those stakes.

But without fair share, the case for non-membership becomes more attractive to people who don't share the political leanings of their union or don't fully comprehend the benefits of union membership.

Most analysts expect the Court to side with Rebecca Friedrichs. If they're correct, it could make for awkward meetings at the water cooler, at least for the first few months after Friedrichs as emboldened "free riders" test liberation from their public-sector unions and employers test the resilience of bargaining units with fractured memberships.

But I suspect those divisions won't last long.

It's a lesson I learned decades ago crabbing on a weather-beaten New Jersey boardwalk.

My cousins and I had a cheap cage with a rope attached, a fish head inside, and a small net at the end of a pole. Every once in a while, you'd pull the cage off the bottom. If the cage was full and the crabs were hungry, there might be one or two hanging on the outside. We called them free riders. They always got caught first.

Ding dong, Scalia's dead. The Supreme Court Justice who may have carried the critical vote in Friedrichs, Antonin Scalia, died just hours after I finished writing this column. His death means that if the eight surviving justices lock in a four-four split, the Friedrichs case will remain undecided by the Supreme Court, allowing unions in fair share states to collect agency fees from non-members. You can curse at or kibitz with Jim Wertz at jWertz@ErieReader.com, and you can follow him on Twitter @jim_wertz.