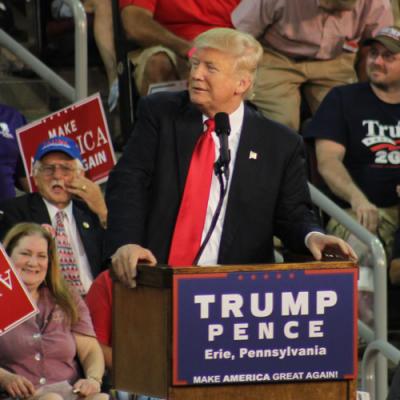 Here we sit. It's the eve of the presidential inauguration and still we search for explanations for the election that preceded it.

For the second time in 16 years, the Electoral College undermined the popular vote, and for the first time – in my lifetime, at least – the country has elected a candidate based not on his merits, but instead upon the disdain they held for his opponent, Hillary Clinton.

Many people believed that Erie County would remain a Democratic stronghold because of its allegiance to the Democratic Party. It didn't. The Clinton campaign believed that, too, and such a narrow-sighted view accounted, in part, for the slim loss Clinton/Kaine suffered here in northwest Pennsylvania. A drive across Pennsylvania in September should have been reason enough for the Clinton camp to reevaluate its strategy. It didn't. And Democrats nationwide assumed that affinities for Bill Clinton would follow Mrs. Clinton into the electoral wild. It didn't.

The 2016 presidential election defied statistical and non-statistical prediction models alike, and Erie became the headline because it went Republican for the first time since 1984.

The 2016 presidential election defied statistical and non-statistical prediction models alike, and Erie became the headline because it went Republican for the first time since 1984. We're not alone, by the way. Our neighbors to the west in Ashtabula County, Ohio also pulled the Republican trigger for the first time since 1984, as did other counties across the Rust Belt and beyond.

The national media have fixated on this question for which there are all too many, and perhaps no adequate, answers. Reporters from The New York Times, NPR, and elsewhere want to provide the American electorate with a dramatic narrative assessment that includes cycles of joblessness, including fewer jobs at economic anchors like GE Transportation, and rebound opportunities in industries with lower wages and less mobility.

But to surrender to this narrative does little to change the course for Erie or to properly explain what happened here this election cycle. Motivated voters turned out in mass opposition to a Democratic Party that is perceived by these voters to be responsible for the social and economic inequality that surrounds them. In this election, Erie County experienced its second highest voter turnout since 2000. In 2008, more than 125,000 people voted in Erie County, but 60 percent of them voted for Barack Obama. This year, more than 120,000 people voted and a plurality of them cast their ballot for Donald Trump.

Trump garnered approximately 10,000 more votes than every Republican presidential candidate since 2000, including George W. Bush. Hillary Clinton, on the other hand, won fewer votes than every Democratic candidate during the same period. To make matters worse for the Democrats, Gary Johnson and Jill Stein collectively garnered nearly twice the votes that Ralph Nader received locally in 2000. Of the 149 electoral districts in Erie County, only those in the City of Erie and the Borough of Edinboro went blue. Trump took every other electoral district in the county but won by just 1.58 percent of the vote countywide. Without the City of Erie, however, Trump would have won Erie County by more than 12,000 votes, according to county voting records.

Perhaps most remarkable is the 10,000 vote swing from Obama voters in 2012 to Trump voters in 2016. Obama defeated Romney 68,036 to 49,025 in Erie County in 2012. These are mostly blue-collar or retired workers who were compelled to vote for Obama in 2008 and 2012, because they shared equal parts hope for the potential of his administration and disdain for his opponent, whose brand of smug elitism has been the poison in the Republican populist well since the party began courting blue-collar Democrats in the 1960s.

Moreover, had she not had to compete in a Democratic primary, Hillary Clinton may have appeared as a candidate whose resolute concern for the American working class motivated her every proposal for a Clinton presidency. Clinton supporters believed in that idea of her. But cast against the proletarian ideology of Bernie Sanders, she appeared inauthentic in her appeal to  working class concerns. As a result, many of the white, working-class men who supported Bernie Sanders in the Democratic primary went on to vote for Donald Trump in the general election, turning the electoral tide in all the right geographic places.

The exodus of white men from the Democratic party in this election cycle is notable. Trump secured the white vote, male and female, by a 20 percent margin, according to Pew Research Center. This is the same margin that Mitt Romney secured in his 2012 loss to Pres. Obama. In 2016, Trump garnered 53 percent of the male vote, 12 percent greater than Hillary Clinton, and more than Romney in 2012 and John McCain in 2008, who only received one percent more of the male vote than Barack Obama.

In short, this election – short on issues, as it was – became more about defeating Hillary Clinton than it was about electing Donald Trump. From May to November, the Republican Party reluctantly coalesced around Trump and made space for disaffected white male Sanders voters who only bore one concern: the economy.

Hillary Clinton may have been well served to repeat political strategist James Carville's mantra from the 1992 presidential race, when asked the most important issue facing then-candidate Bill Clinton: "The economy, stupid." Instead, she was forced to react to a litany of issues that Republicans had logged since 1993, many of which focused more on her character than on her plan for America.

It created an opening through which never-Trump-ers could become philosophically aligned with never-Her; it created a strange political moment in which we now find ourselves; and it provided the context to tell the story of when Erie went red.