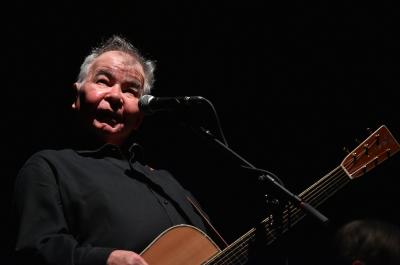 WFUV Public Radio via Flickr
Country folk singer-songwriter John Prine, known for his witty and honest lyricism, had recently received a Grammy Lifetime Achievement Award before passing away on Apr. 7 in Nashville, Tenn. as a result of COVID-19.

Unlike many others who battled COVID-19, the celebrated country-folk artist had his wife by his side, for a time, because she was also hospitalized with the virus. She improved and was sent home. He was placed on a ventilator and never recovered.

Prine's story seemed to be a common refrain in the American song earlier this year as we watched New York City come to a standstill, as the death toll rose by nearly a thousand per day at the peak of the now infamous COVID curve.

Images of active duty military and National Guardsmen transferring the dead from hospitals to makeshift morgues in refrigerated trailers lining the once-bustling streets of Gotham, and finally to the mass-grave burials on Hart Island, leaves an indelible mark of this moment on history.

Unfortunately, that mark is not resigned to leave us only thinking of the dead. Once the ill enter those halls, their only interactions are with the ones who Fred Rogers referred to as "the helpers" — the doctors, nurses, and medical staff who put in long shifts wearing layered synthetic suits with filtering masks, faceguards, and anything that might protect them while they help the helpless.

Today, at the Cleveland Clinic, nurses write messages to, and goals for, patients on the windows of their rooms so that the patients understand what is happening around them. Stories from across the country abound of simple gestures like sitting bedside for a few minutes to hold someone's hand or calling a patient's loved one on a personal cell phone when the patient is too weak to do it for themselves.

Daniel Akinyemi, an ICU nurse in Montclair, N.J., told The New York Times about one of the hundreds of calls that have come from people checking on the status of their loved ones. Akinyemi asked a husband if his wife had a favorite song. She did, the husband replied. "Blue Bayou," which she sang while she did laundry and fixed her hair. Akinyemi returned to the woman's room, where she had been placed on a ventilator, played the song on his iPhone, which he kept stored in a plastic sandwich bag to keep it from being exposed to the virus, and sang to her, later reading her a favorite Bible verse.

You've seen the pictures of their bruised faces, their battered spirits, and their heroic resolve to see the hardest-hit regions of the country through to the other side of this global pandemic. As it is for those who must overcome COVID-19, we have yet to know the long-term effect of this experience on this population of medical professionals. Some simply surrender.

When someone inflicted with COVID-19 walks or is ushered through the doors of a hospital for treatment, they enter alone. Families are turned away at the door, asked to wait at home until further notice can be given regarding the fate of their loved one. The intensive care unit becomes a solitary confinement where the only interaction is between the patient and those trying to help.

If the patient survives, as many have, the path to full recovery can be long. NPR reported the story of David Williams, a Marine veteran, who spent eight days on a ventilator. In recovery, he's experiencing something called post-intensive-care-unit syndrome, which results from the muscle loss and brain damage caused by the invasive treatments required for some COVID-19 patients. When Williams woke from his medically induced coma, necessary to give the ventilator control of his lungs, he couldn't move his arms or legs, and he had trouble forming complete sentences.

"It takes me a while to think about the words I need to say," Williams told NPR.

Weeks later, he remained on oxygen and used a walker to help regain full mobility. And Williams was one of the lucky ones. He survived.

As of May 17, more than 90,000 Americans have died from COVID-19. That's nearly a third of all COVID-related deaths worldwide and three times more deaths than the United Kingdom, Italy, and France — the hardest-hit countries behind the U.S., according to Johns Hopkins University, which is tracking the virus through its Coronavirus Resource Center.

New York State has experienced the most deaths, attributing nearly 28,000 to COVID-19 since March.

But because the mass casualties have been largely confined to major metropolitan areas, the effects of this virus feel distant to many people. It's — apparently — too easy to dismiss the suffering associated with contracting COVID-19 and the reality that is the experience of those who enter a hospital with few prospects of leaving healthy.

For them, the truth is dire. They die alone.

It's a cruel and fundamental reality of COVID-19 that gets buried amidst the anti-fact protests calling for a return to comfortable pre-pandemic poverty and the political clown car that is the White House press room.

A dysfunctional minority has abandoned empathy in favor of self-interest.

The misguided conservative freedom corps' crusade to re-open the American economy despite the consequences continues to come up short. As far as scientists can tell, the virus most damns those who are already vulnerable and discriminates most against those who already suffer.

But those who care only for a cheeseburger or an hour at the salon, screaming about their superficial so-called freedoms, will be the itinerant carriers for the next wave of this unforgiving threat. While they themselves may not succumb to the virus' symptoms, they may still transfer the virus to others, some of whom may suffer from something that makes them more susceptible to the virus' wrath. Do their freedoms come at the expense of others? Does it give them the right to unwittingly serve as the vehicle through which the virus may ride up the crest of a second wave?

They are led by a president who measures his success by the ratings of his daily press conference rather than in lives saved. He refuses to wear a mask (even when touring a mask-producing facility) because it would undermine his unfounded arguments against their effectiveness. And because he leads, the federal response to COVID-19 is a hopeless farce.

Our faith and our fortunes lay only in the hands of governors and legislators, who are now besieged by the same conservative activists who clamor for states' rights and local control when federalism provides a shelter for racism and subjugation.

If science and reason are to be set aside because such facts contradict the cowardice cries of the misinformed, then, as Shakespeare reminded us, our fault is in ourselves.

Yet there is time to correct our course, and to act on behalf of the many in spite of a few.

As we approach November, we have an opportunity to restore order to an orderless and chaotic moment in American history. The unscrupulous and inadequate leadership of a president who speaks and acts from a place of little knowledge, and the congressmen who blindly support him in favor of power over people, can be recalled with the power of your vote.

It will take a leader who understands consequences and who respects that they are making decisions on behalf of honest Americans to lead us toward a better tomorrow and a stronger America.

But one cannot have a healthy economy without a healthy population to run it and consume from it.

We can't sacrifice public health at the altar of the Almighty Dollar. Otherwise, John Prine had it right when he sang, "Jesus Christ died for nothin', I suppose."