Kids across time have engaged in risky behavior, but digital technology gives them a means to broadcast their stupidity. 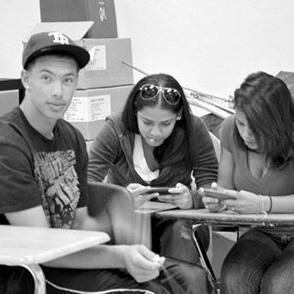 Parents just don't understand. That was the mantra of my generation, ushered in during the spring of 1988 by DJ Jazzy Jeff and the Fresh Prince.

The generational divide between parents and their children has been a common theme in teen culture since the 1920s. But today that generational divide is compounded by a technological divide that many parents are ill-equipped to bridge. Teenagers communicating via social media and text message have deafening and sometimes dangerous conversations … in silence.

So when the Millcreek Police announced Nov. 14 that they were investigating allegations that several students had received inappropriate text messages on their phones, it seemed an inevitability of the digital age. Just the day before, the Chester County District Attorney charged a fourth student from an affluent suburban Philadelphia school district with criminal charges related to the dissemination of a photo sent by a young girl to her then-boyfriend when she was just 13.

To be clear, we don't yet know the details of the McDowell case and Millcreek Police did not respond to our request for an interview. But sources inside McDowell High School suggest that the situation may be similar to the Chester County case and so many others saturating national media throughout the past decade.

What began as a consensual, albeit stupid, act has now become a gross invasion of privacy with legal and social consequences for both the subject of the photos and the people who shared them. If the offending party happens to be an 18-year-old senior who dated or simply received pictures of an underclassman, the stakes are even higher.

Most states do not have legislation to deal with underage sexting and therefore prosecutors lack the latitude to exercise any legal option other than charging the students under state child pornography laws. Depending on age, this could land the offender in prison and on child sex offender registries alongside adults who prey on children in the worst ways imaginable.

That same year, 18-year-old Florida resident Phillip Alpert had to register as a sex offender when he shared photos of his 16-year-old girlfriend with her friends and family after an argument with the girl, who had taken and sent him the photos weeks before.

Parents need to explain these uncomfortable realities to their children. Kids across time have engaged in risky behavior, but digital technology gives them a means to broadcast their stupidity.

Parents need to explain these uncomfortable realities to their children. Kids across time have engaged in risky behavior, but digital technology gives them a means to broadcast their stupidity.

And here's the problem: they're being held to an antiquated legal standard that was intended to protect kids from predatory adults. The law was not designed to address teens' technological indiscretions.

Pa. lawmakers have proposed legislation that would address teen sexting as an act separate from child pornography. But until such legislation passes, teens like those in Chester County can be charged with a felony offense under the state's sexual abuse of children statute, subject to up to 25 years in prison, $25,000 in fines, and required registration as a sex offender.

What's different about the Chester County case is that the boys who shared the photos did so with the intent of harassing the victim by humiliating her on social media. Even under teen sexting statutes, such behavior warrants a greater penalty because the offenders acted with malice.

For those who have been victimized by sexting, the social consequences can be equally brutal. When the photos go from private to public the subjects are often ridiculed or shamed, leaving them psychologically scarred, reputation-damaged, or worse. In 2008 a Cincinatti, Ohio teen hanged herself after a photo she sent to her boyfriend was circulated across several Cincinnati schools. She became the victim of cyberbullying because someone shared her photo.

Kids are predisposed to making serious and sometimes terrible mistakes, but research indicates that those educated about the consequences of their cyber-actions are less likely to engage in such behaviors.

To many observers, the culture of short messaging and self-absorbed imagery is evidence of a great unraveling of social mores. But the paradoxical truth is that the world of our children has simply become much smaller and more aggressive even within the vast expanse of the Internet. Rumors are no longer spread slowly with the tacit nod to the fiction that underlies them. Instead their lives – real and imagined – have become a significant part of the real-time picture of social media. The box has been opened and there is no turning back, and most of us would never choose the past if given the option.

Our challenge now is to protect our children, innocent and naive. To do that our legislators will have to ensure that our laws keep pace with the actions they regulate, which means keeping pace with technological change. The last generation of analog parents are raising the first generation of digital natives who live life in the palm of their hands. They're going to need some guidance, even if parents still don't understand.