Erie at Large: Roar on the Shore and Economic Development

Jim Wertz explains his disdain for Roar on the Shore. 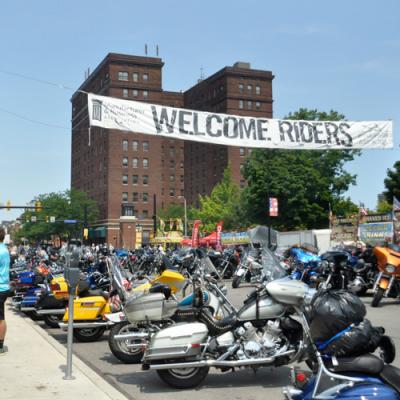 Despite a preponderance of evidence to the contrary, my mother raised me right. So I wanted to say something nice. I really did.

But when the Manufacturer and Business Association announced its lineup for this year's installment of the Roar on the Shore Thursday, Feb. 12, I just couldn't keep it in – disdain, disappointment, a mild roar.

Maybe it's the hypocrisy of an organization with a philosophical mission to destroy organized labor hosting a motorcycle festival to celebrate the culture of motorcycles historically assembled by organized labor that gets stuck in my craw. Maybe it's unfettered capitalism masquerading as charity that I don't like. Or maybe, just maybe, it's that event organizers continue to refer to Roar on the Shore as economic development when, in fact, it is not.

If you've ever had the pleasure of visiting the Harley Davidson factory in York, Pa., you quickly realize two things: Every man and woman in the factory was, for lack of a better phrase, born to ride; and every laborer in the factory is a member of the International Association of Machinists and Aerospace Workers.

At its peak, the Harley plant in York employed around 2,000 union workers. But in 2008 the company announced its intention to cut the workforce in York by half – a result of automation and other "efficiencies," as well as an aging population of consumers who were buying bikes on the back end of a lucrative second act instead of spending big bucks as some form of youthful indiscretion. The union leadership got defensive and the company threatened to move to Kentucky.

In 2009 after much negotiation and deliberation, the union offered a counterproposal. It would sacrifice half of its workforce and reclassify job descriptions in exchange for $90 million to be reinvested in the York plant. It was a hard bargain but a pragmatic one that ultimately saved hundreds of jobs and made Harley Davidson a more nimble and profitable company. It was also the kind of deal that organizations like the Manufacturer's Association claim isn't possible when dealing with unions, which are more often looked upon as terrorist groups than advocates for the fair and ethical treatment of the nation's workforce.

No doubt, Roar on the Shore brings thousands of easy riders into Erie County each year and those people spend lots of money while they're here. But don't try to go downtown if you're not on a motorcycle. Downtown parking is motorcycle-only and the weeklong street closures make it difficult to reach popular bars, restaurants, and retailers. For proprietors looking to lure the Roar, there is but one option: Join the club and become a sponsor.

Talking to downtown-business owners last summer, I was reminded of the scene from Goodfellas in which Ray Liotta's character describes how business owners who got into bed with the mob were treated when they couldn't pay their weekly vig. "Business was slow? F-you, pay me. Rent was due? F-you pay me." In other words, there was no way to tell bikers about local business, unless the local business owner bought into Blue Ocean bullshit spewed by festival organizers.

It's also notable that while literally tens of thousands of bikers pass through Perry Square during the event, no one gets a taste of Erie in the park. Social media roared last year about the absence of local vendors at the festival's main attraction. One vendor bought all the space, I'm told, and the organizational and fiscal merits of such a scenario trumped the fleeting notion of community involvement.

And in the event you wanted to wade downtown for any one of the 1980s powerhouse rock bands that grace the stage, you'll be charged for direct access to the main stage, which was and will be cordoned off by a ten-foot-high chain-link fence, making ticket holders look more like POWs than VIPs. (Think: Red Dawn, the one with the Russians, not the one with the North Koreans, and you'll get the picture.)

It's not that there shouldn't be a VIP section. Surely, people who love the smell of sweat and money need somewhere to congregate, but blocking the flow of pedestrian traffic to and from local bars on the north-end of State Street and forcing ticket holders to buy booze inside the holding pen seems to be lesser, not better.

I'm willing to concede that the Manufacturer and Business Association is very good at executing its Blue Ocean Strategy with Roar on the Shore, but I'm yet to be convinced that the benefits exceed the costs. True economic development is like a flu vaccination; its effects are long lasting and stabilizing. So far, however, Roar on the Shore feels more like the flu. It comes on fast and you're grateful when it's gone.