A look at the legislative tactics aimed at disenfranchising voters 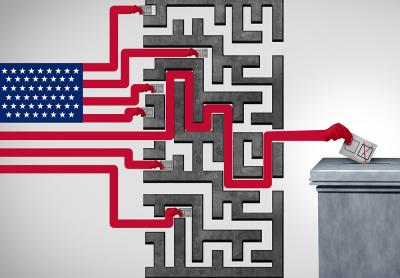 freshidea
Erie's Republican State Senator Dan Laughlin announced that he would put forth a constitutional amendment requiring voters to present identification to vote. Such actions are widely understood to be an attempt to suppress the votes of young, poor, or already marginalized voters.

Republicans in the Pennsylvania General Assembly are reliably consistent on two related fronts. In recent years, they've pushed a spate of voter suppression legislation under the guise of election security, and when they believe their undemocratic legislative efforts will die on the tip of the governor's veto pen, they try to place their agenda on the ballot as a constitutional amendment. It's a move designed to usurp the governor's veto power and to undermine the legislative process.

Following suit, Erie's Republican State Senator Dan Laughlin announced in December that he would introduce a constitutional amendment to require every Pennsylvania voter to show identification each time they go to the polls. Currently, voters are only required to show ID the first time they vote or the first time they vote at a new polling place as a result of a change of address.

In order to put a constitutional amendment on the ballot, it must pass through the General Assembly in two consecutive terms. Laughlin's bill, Senate Bill 1 of the 2023-2024 legislative session, would be the second passage of a voter ID amendment that was introduced by Republican State Senator Judy Ward and passed in the 2021-2022 legislative session. If passed, SB1 could be on the ballot in the May 16 primary election.

Universal voter ID laws, like the one proposed by Laughlin, are widely seen as an attempt to suppress the votes of young voters and poor voters, particularly Black and Latino voters in those categories, who are less likely to have a government-issued ID.

The costs associated with obtaining a government-issued ID like a drivers license or a non- driver state ID can be prohibitive for many people, even when states offer free ID. That's because those ID seekers might have to take time off work, pay fees to other governmental agencies for a birth certificate or another primary form of identification, or incur significant travel costs to get to a location where ID services are available. The travel burden can be significant for the disabled, the elderly, and people who live in rural areas without access to public transportation, according to data collected by the American Civil Liberties Union (ACLU).

Other states that have passed universal voter ID laws appear to have specifically targeted rural poor and Black voters. In Texas, some rural residents travel as far as 170 miles round trip to the nearest state ID office; and in Alabama, state officials closed 31 drivers license centers — mostly located in majority Black counties — one year after enacting a strict voter ID law. A 2014 study by the Government Accountability Office found that unnecessarily strict voter ID laws can reduce voter turnout by 2 to 3 percentage points, which could be significant considering that the margin of victory in Pennsylvania during the last two presidential elections was less than 2 percent.

It probably doesn't need to be explained, but the people most affected by voter ID requirements tend to vote Democrat when they go to the polls. So it seems all too clear that Pennsylvania Republicans in the General Assembly — most of whom favored overturning the results of the 2020 presidential election — are simply setting the stage to legitimize the coup they failed to pull off last go round.

Laughlin argues that SB1 has widespread public support, and it did. But that's only because of widespread misinformation and false claims about voter fraud in the 2020 election. Laughlin's co-sponsorship memo introducing the bill references a June 2021 Franklin & Marshall poll in which 74 percent of Pennsylvanians said they support a law requiring all voters to show ID to vote. But this poll was conducted as the conspiracy to overturn the 2020 election raged on, and false claims were repeated (ad nauseam) by Republican pundits and elected officials alike.

A review of Franklin & Marshall polls by PoliticsPA.com found that the same question yielded much less support — just 26 percent — when asked in May 2022, and almost no support — just 1 percent — in August 2020, before the "Big Lie" permeated the political landscape.

In other words, voter ID laws have virtually no support among Pennsylvania voters without the lies and half truths about election security in the commonwealth.

That's because the system works.

According to a report by the York Daily Record, prosecutors across Pennsylvania filed charges in just four cases of voter fraud in the 2020 election. Three of those four offenders were registered Republicans who attempted to vote in person for deceased or absent voters, and the fourth was a registered Democrat in Bucks County attempting to complete a mail-in ballot for her mother, who passed away in September 2020 after legally requesting the mail ballot. Election officials in Bucks County flagged the forged signature on the external envelope and identified the voter as deceased before notifying police. The envelope was set aside and the ballot was never even opened. The checks and balances set in place by county election staff proved successful in all four cases.

It's the continuation of a broader "will of the people" strategy to undermine democratic processes in the Commonwealth of Pennsylvania. And in his new role as Republican policy chair in the Pennsylvania Senate, Laughlin controls the flow of hearings and data collection that inform the Republican legislative policy agenda in the Senate, including this proposed constitutional amendment.

Let's just hope he won't need Rudy Giuliani to come back and explain it.

Jim Wertz is a contributing editor and Chairman of the Erie County Democratic Party. He can be reached at jWertz@ErieReader.com and you can follow him on Twitter @jim_wertz