Erie at Large: The drama of funding education in Pennsylvania

Schools in play: The drama of funding education in Pennsylvania 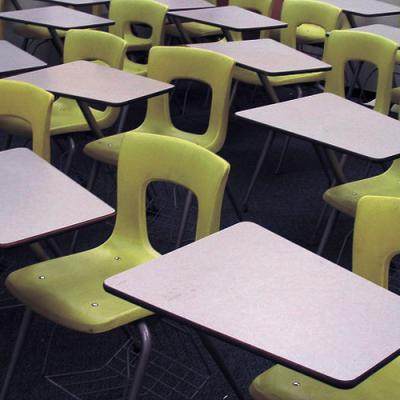 The budget fight in the state legislature and its impact on local government and education has become shrouded in drama. So School Play, the documentary theater production staged Oct. 13 at Iroquois High School, felt troublingly real.

School Play is social commentary on par with the great Works Progress Administration plays of Clifford Odets and the lyrical construction of a Stephen Sondheim musical. But this production is minimalist. No music. No sets. Simple staging. Six wooden school chairs and five actors, each wearing blue shirts and grey pants, shifting seats and changing characters based on their lines and the tenor of the scene. The result is 60 minutes of resonant first-person storytelling from voices familiar and unique, elite and popular.

School Play opens like every school day, with the Pledge of Allegiance. The audience is compelled to participate. Following this ritual, the cast of five enters into rapid-fire reminiscence about "my favorite teacher," that person from high school whom everyone carries in spirit. Some still teaching, some retired, some let go because the budget demanded action.

The characters in the play include former Pennsylvania Secretary of the Budget under Tom Corbett, Charles Zogby – the villain in this sordid tale, to the extent that one exists outside the system itself. Even Zogby eventually concedes that "when adult interests come into conflict with kids' interests, I don't think kids win." Other lines are drawn from students asking what they will do on Monday, Wednesday, and Friday, now that their school nurse has been cut to part-time, working just Tuesday and Thursday; and the high school theater teacher with a PhD in educational creativity who works four jobs to support her teaching habit.

These stories represent the decades-long challenge facing public education to create an equitable system allowing school-aged children from diverse economic and geographic backgrounds to compete in an increasingly complex fiscal and intellectual marketplace.

But the sad reality is that this year's budget crisis isn't just about the $120 million being left on the table for universal Pre-K education, or the $400 million in Gov. Wolf's budget for K-12 classrooms held hostage by the General Assembly. That $400 million, by the way, simply restores funding for education to pre-Corbett levels. Even if the budget passes as proposed, we're still rolling back the clock on Pennsylvania's kids. The funding model used to distribute general education money to school districts is one of the worst in the country because our school funding is bound to an undetermined annual budget process.

It hasn't always been that way.

"Between 2003 and 2010, Pennsylvania strategically invested state education funding in order to ensure students had necessary resources to meet state academic standards," concludes the  Education Law Center. This funding model distributed state appropriations based on students' needs as well as each school district's geographic and demographic characteristics. Districts with low tax bases and larger populations received more money. So did districts with larger gaps in educational attainment or more at-risk youth. Not surprisingly, the districts that received the largest funding increase during this time also experienced the greatest improvement in student achievement.

The funding matrix used by the Rendell administration was so successful that it served as a model for the majority of U.S. states that have adopted what's now known as "sound education funding." That formula accounts for the number of students in each district, community poverty levels, and local taxes, with additional consideration given to districts with large populations of people for whom English is a second language. Forty-six states use at least one variable other than base costs to distribute funds. Pennsylvania, however, has abandoned these principles. Now only nine states allocate less money for public education.

The city tax rolls are so poor that the Erie School District received almost 70 percent of its operating budget from the state, making concessions like closing schools, laying off teachers, and increasing class sizes to keep the doors open.

Statewide, school districts receive approximately 35 percent of their funding from Harrisburg, 10 percent from the federal government, and the rest from local funding, mostly property taxes. In a city like Erie, with a diminished tax base, high poverty rates, and a stagnant population, this is a problem. In fact, the city tax rolls are so poor that the Erie School District received almost 70 percent of its operating budget from the state, making concessions like closing schools, laying off teachers, and increasing class sizes to keep the doors open. The end result is that Erie's gap between what's needed to "properly" educate each child and what it can afford to spend grows ever wider, while nationally U.S. taxpayers contribute $13,000 more per prisoner on incarceration than we do per student on education.

The stark reality is that most parents can't choose a better zip code, so some kids will interact with digital smart boards, while others inhale chalk dust; and some kids will go to the school psychologist because their parents took away their Xbox, while others will seek security, clean clothes, and meals from a counselor whose caseload is larger than the graduating class in a neighboring district.

Passing the budget to restore educational funding is only the first step. Repairing the tragically flawed model used to distribute the money needs to be the end goal, whether or not it's politically expedient to do so.