Erie at Large: The Homecoming 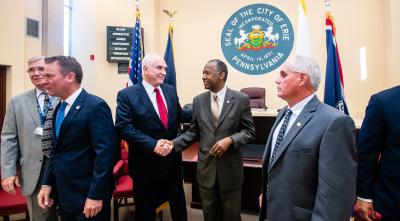 Homecomings are an important institutional moment. They are, at once, nostalgic and forward-facing. They represent the values of the past and serve as an illustration of how those values inform the future.

So what values were on display when Dr. Ben Carson — the pediatric neurosurgeon turned Republican presidential candidate turned Secretary of the Department of Housing and Urban Development (HUD) — came to town last week as the keynote address to the Erie Homecoming, an event designed by the Erie Chamber and Growth Partnership to attract the attention and investment of Erie ex-patriots?

Flanked by Congressman "White Mike" Kelly, Carson championed Opportunity Zones and, separately, announced that Erie was one of the locations nationwide that would receive grant money for lead abatement in Section 8 housing. The program for which he used Erie as a prop to discuss is part of HUD's general budget and was included in the bipartisan budget bill, which Kelly voted against. It was all pre-election year theater.

There was little added value in an invitation to an underqualified cabinet official.

Sec. Carson is eminently qualified to talk to the staff and hospital administration at any one of our local medical centers about the nuances of pediatric neuroscience. He's far less qualified to talk about a subject related to his role in Housing and Urban Development. His tenure has been marked by blind-eyed support for this administration's assault on poor people and the underinvestment in resources that HUD is tasked to distribute and regulate.

Among its myriad responsibilities, HUD serves many critical functions of the federal government's interactions with, primarily, poor people in this country. Upon announcing in December 2016 that Carson would be the next HUD secretary, both President Trump and Carson acknowledged that the housing shortage for poor people was nothing but catastrophic. Trump pointed to Carson's childhood living in public housing in Detroit as merit enough for Carson's nomination.

HUD oversees the Section 8 program, which helps provide assistance for private and public housing to nearly 8 million people. But under Carson's leadership at HUD and at the direction of the Trump White House, financial support for Section 8 is under attack. The administration proposed budget cuts of nearly 20 percent, although those were later restored by Congress. And, according to the Los Angeles Times, both the agency and the administration has used the program to target immigrants and justify the displacement of tens of thousands of Americans in the process.

In 2018, Sec. Carson pitched a plan to triple the rent on the poorest people living in public housing. People paying the minimum rent of $50 — those least likely to have additional means of income as a result of age or disability — would have seen their rent increase to $152 per month under the Carson proposal. The typical family living at this rate would have less than $50 left each month for food and additional expenses.

Why? Carson argued that restricting income by raising rent — thereby leaving less money for basic necessities like food, toothpaste, and soap — would force people to look harder for work.

In March 2019, Trump and Carson doubled down on raising the rent on residents in publicly subsidized housing, to cut all funding for Community Development Block Grants (CDBG), and to pull federal oversight of public housing maintenance in rural and urban communities. As has become standard operating procedure, Congress mitigated the cuts to CDBG funds and other programs that are instrumental to the health and welfare of Americans in communities large and small.

Nevertheless, those who receive HUD-regulated housing are increasingly living in dangerous conditions with nowhere to turn.  A 2019 study by NBC News found that more than 1,000 of HUD's 28,000 federally subsidized private housing developments failed basic inspections for health and safety violations. The failure rate increased by 30 percent between 2016 and 2018. Inspectors and tenants reported rodents and bugs, including cockroaches and mice, mold covering walls and furniture, and burst pipes that have caused ceilings to collapse and drywall to rot while residents face a choice between homelessness or squalor.

Federal inspectors give the property managers deadlines to correct problems, but the deadlines come and go without follow-up inspections, in part, because HUD has lost hundreds of staffers since Trump took office and mandated a hiring freeze. Those who have remained with HUD have been reoriented toward the enforcement of immigration policies that are used to prorate housing subsidies for poor immigrants based on the ratio of documented to undocumented people living in an apartment, but now threatens them with eviction. The Boston Globe reported that most mixed-status families try to stay out of public housing; those who live in subsidized housing pose one of the largest impacts on the already large and growing homelessness crisis in the United States.

Both Trump and Carson have stroked nativist tendencies by arguing that they need to "clear" public housing "for Americans." But according to the Center on Budget and Policy Priorities, nearly 75 percent of the people who qualify for some form of public assistance don't get it. Shamelessly, for Trump and Carson, it seems the only priority is to clear public housing.

Maybe that fits into the investment narrative of Erie, but I don't think it does. And it goes without saying that it shouldn't. The time has long passed for our elected officials and business leaders to stop allowing this sociopath of a president and his administrative stooges to use Erie as a backdrop against which to frame their regressive policies.

Erie is better than that and investors need to know that it's true.

Ben Carson may have grown up in public housing but he's long outgrown his understanding of what it means to be poor.