A crowd filled Erie City Council chambers on Jan. 31 to better understand the methods driving the plan to reduce violence across Erie County. 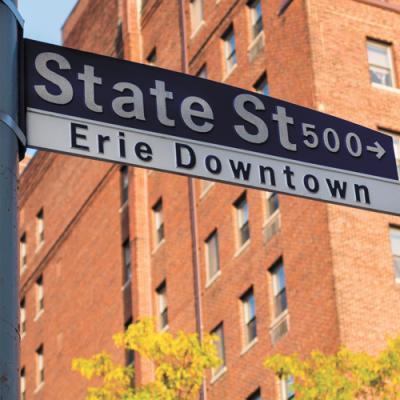 The room was full, standing room only, in fact, and racially diverse. The crowd filled Erie City Council chambers on Jan. 31 to better understand the methods driving the plan to reduce violence across Erie County and, in particular, in the City of Erie. The program was organized by UnifiedErie, which began in 2010 as the Erie Unified Youth Violence Reduction Initiative. Its mission of violence reduction remains unchanged, even though its name and approach to violence reduction have evolved.

UnifiedErie's "public health" approach to fighting violence is mystifying to some. That concept leaves people asking what gunplay and disease have in common. Violence in the 21st century is no different, in many ways, than influenza in the last century or typhoid in the century before. It's got an origin – a patient zero, if you will – an active culture for transmission, and careless or unsuspecting carriers, most of whom are not willing to admit that they're part of a larger problem, an impending epidemic.

The public health approach is data driven, so results are cumulative and longitudinal. This leads some cynics to question the validity of the method and the reliability of its results. But given time and, of course, reliable data, the results yield information that ultimately leads to the resolution of the problem.

That data collection has been ongoing for nearly five years and UnifiedErie is implementing a new and, to some, controversial phase of the program. It's branded the "call-in" and it's a treatment that utilizes extant data to identify chronic offenders and invite them to meet with community services, law enforcement, and prosecutors. The offenders face a Hobson's choice: embrace support networks that keep them running within the bounds of the law or face the maximum penalty as a consequence of their actions.

Think of the call-in in the same vein as a 12-step program. Chronic behavior leads to an attempted intervention by loved ones. Chronic offenders can accept the offer or continue down a path that ends with an inevitable worst-case scenario. If offenders accept, they are offered resources to help keep them on the path to civic responsibility; they are asked to believe in something greater than themselves – children, family, God in whatever form that takes; and they are encouraged and assisted to change the routines and behaviors that led them to offend in the first place.

"Trust is huge," said Marcus Atkinson, who directs the Downtown YMCA Teen Center and hosts programs on WQLN television and radio. Trust is the nexus between those in need of help and those willing to offer a second chance.

The biggest impediment to trust, in this scenario, are those who undermine the options presented to offenders. Sometimes it's family – parents, siblings or other relatives – who see cooperation with any authority as an affront to the false promise of crime. Sometimes it's others in the community who make excuses or offer no substantive alternatives to those presented by the official voices behind the call-in.

At the moment, the chief opponent to call-ins in Erie is Bishop Dwane Brock, who leads the Victory Christian Center on Erie's east side. Brock has long led his flock and mediated violence within his community. But in this case, his position is simply wrong.

His opposition is predicated upon the conviction of Katrina House, who received a mandatory minimum sentence of two years for carrying out multiple identity thefts of low-income and homeless people. Brock compares the prosecution of House, who is black, with the conviction of David Earls, a white man who embezzled nearly $170,000 when he was the business manager of the St. Peter Cathedral School.

House was charged with aggravated identity theft, which prompted the mandatory minimum. Earls plead guilty to a third-degree felony, which carried no mandatory minimum. House is heading to prison while Earls is free on probation.

Brock's objections are clear and not unfounded. He sees House as representative of a justice system that unfairly impacts minorities and the poor. He's not wrong.

Brock's objections are clear and not unfounded. He sees House as representative of a justice system that unfairly impacts minorities and the poor. He's not wrong.

But Brock has overlooked the fact that the cases of House and Earls are dissimilar, a fact that one would guess has not eluded Erie County District Attorney Jack Daneri and Assistant U.S. Attorney Marshall Piccinini. Both are heavily involved in the call-ins and Piccinini prosecuted the House case.

However, by attempting to thwart UnifiedErie's call-in strategy as a means of bringing House's case to the court of public opinion, Brock is creating a straw man that ultimately undermines the powerful progress UnifiedErie stands to make in a community which Brock, himself, claims to serve and support.

To follow through on the 12-step analogy, Brock's public stand against UnfiedErie is effectively enabling – and dare I say emboldening – the violence on Erie's east side.

Brock's voice could loudly lend itself to the call-in cause. Instead, his opposition is polarizing for a community that often defers to its clergy for guidance and to engender the trust that Atkinson spoke about so passionately before the crowd at Erie City Hall. Brock is challenging an initiative that has been effective in communities much more violent, stratified, and hopeless than Erie to forward a political agenda that would be better argued to the legislators who established the legal practice of mandatory minimum sentences.

There is no doubt that Erie's violence problem is profound when compared to the region's past. But the evidence-based course set upon by UnifiedErie is one very significant part of resolving this crisis.

That's why it became ever more unfortunate that as the UnifiedErie leadership team made its case for a public health approach and, in particular, the call-in strategy, Bishop Brock wasn't there to hear it.