Both weekend visitors and Erie natives will fill the downtown Erie streets for four days of summer festivities.

by Tracy Geibel
View ProfileFacebookTwitterRSS Feed
August 17, 2016 at 9:15 AM 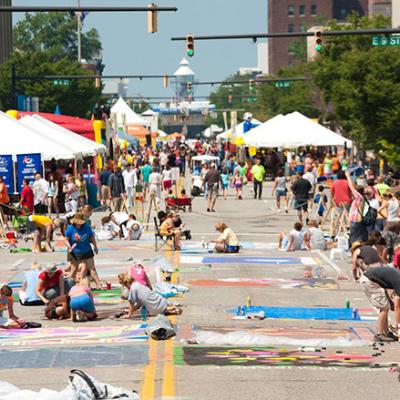 From Thursday Aug. 18 to Sunday Aug. 21, both weekend visitors and Erie natives will fill the downtown Erie streets for four days of summer festivities, known as CelebrateErie.

Split into several zones, CelebrateErie allows attendees to experience Erie in multiple ways. They can view artwork at the Erie Art Museum or admire the spectacular sidewalk murals on the Chalk Walk. As part of the Taste of Erie zone, visitors can try some of Erie's best food samples from local restaurants.

Split into several zones, CelebrateErie allows attendees to experience Erie in multiple ways, from artwork to food to music.

And no Erie event would be complete without live music to keep the party going. Rising from their graves just for this special occasion, Here Come the Mummies is a funk-rock band claiming to be from ancient Egypt. These mummified musicians promise "unrelenting live shows" that will "bend your brain and melt your face." The band has opened for P-Funk and Al Green, and it's been invited to multiple music festivals in recent years. If you aren't afraid, you can see one of their chilling performances on Thursday night at 8:30 p.m.

The funk continues on Friday night, when Thomas McClary, co-founder of The Commodores, takes the stage at 8 p.m., following performances by Familiar Spirit Band and The Groove. The Commodores have earned several number one hits, and are well known for songs like "Just to Be Close to You" and "Brick House," among others.

On Saturday at 8 p.m., legendary rock and roll artist Randy Bachman will perform after a line-up of four other bands, which begins at 2 p.m. This talented Canadian musician has collected more than 120 gold and platinum albums in his career.

Frankie Ballard will finish out the festivities on Sunday night at 8 p.m. with the final headlining performance. This country artist writes for his audience, hoping that his lyrics create a true connection with fans. His most recent album, El Rio was named in the top 25 country albums of the year by Rolling Stone. Released in June, El Rio includes songs like "It All Started with a Beer" and "Cigarette." Ballard is also well-known for recent hits like "Sunshine and Whiskey" and "Helluva Life."

But Celebrate Erie isn't just for adults. The kids can't get bored when there are two city blocks devoted entirely to them. The Kids Zone stretches from Eighth to 10th streets, providing a variety of kid-friendly activities and a stage that features performers from Lake Erie Ballet, Erie Dance Theater, Erie Playhouse Youtheatre Showstoppers, and more. It's perfect for parents, too.

For a map and a complete list of all performances, events, and other activities, visit celebrateerie.com. – Tracy Geibel