Charitable organization timely in its support of community 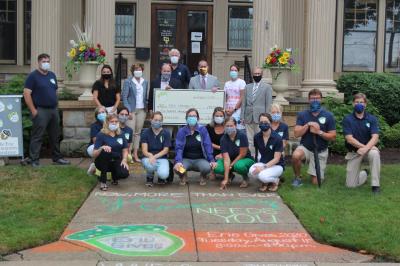 It's fitting that the Erie Community Foundation's origins reside with Boston Store co-founder Elisha H. Mack. Just like the store's iconic clock, one of the Foundation's defining features has been its timeliness. And in 2020, during the region's hours of greatest need, the charitable organization delivered at a moment's notice.

Shortly after the cruel hand of the pandemic struck last March, the Foundation countered by raising $667,801 for 41 local nonprofits in just two weeks. The highlight was a $168,000 grant to the Second Harvest Food Bank, which went toward 600 emergency boxes providing meals and nutrition to Northwest Pennsylvania's neediest families. Throughout the year, the Foundation was forced to shuffle its funding timelines as new challenges surfaced practically by the minute.

But thanks to the overwhelming generosity of the community, the Foundation was afforded the flexibility to adapt. Record growth was fueled by record-shattering donations, in particular on Erie Gives Day. Defying expectations, the 10th iteration of the annual fundraising event raised $6.3 million in just 12 hours.

"Not in our wildest dreams did we think the Erie Gives would attract 2,500 more donors and raise nearly $1 million more than the prior year," admitted an astonished Mike Batchelor, Erie Community Foundation president.

On that day in August, more than 11,000 unique donors chipped in for 400 nonprofits. Over the course of 2020, the Foundation received over $21 million in new gifts, and awarded over $47 million in charitable grants. The combined value of its nearly 900 individual named funds topped $301 million.

Looking toward the future, the Foundation was vocal in its support of the newly-established Erie County community college, with Batchelor affirming, "Long term, this new institution has the potential to serve local businesses while transforming the lives of thousands in our region."

Another potentially transformative prospect is Erie Insurance and the Foundation's recently forged partnership with Arctaris Impact Investors, LLC, who pledged to commit $40 million in investments toward revitalizing Downtown Erie. The majority of those funds will be allocated toward Erie Downtown Development Corporation projects in the whereabouts of Perry Square, while the rest will be funneled toward Mission Related Investments throughout Erie County. The 10-year Arctaris Erie program will continuously gauge the social and community impacts of these investments and share its findings with stakeholders locally and nationwide.

Says Batchelor: "Arctaris brings 11 years of expertise and substantial financial, government, and philanthropic relationships that can be leveraged for additional grants and investments in Erie," said Batchelor. "The Kresge Foundation's support of Arctaris, and their partnership with Harvard's Institute for a Competitive Inner City, will provide Erie with direct access to research and important best practice models."

The end products will become apparent with time, but in the interim, Batchelor cannot help but feel as if Mack and those others who laid the groundwork for the Foundation would be encouraged. "I doubt they could have foreseen the COVID -19 pandemic, but I'm very glad they demonstrated their belief in our future by creating a flexible charitable legacy that can respond to changing local needs,"  he said.  "No one knows what the future will bring, but I'm confident The Erie Community Foundation will be here to help."