Cocktails, Trivia, and All Things post-Edwardian England Await You at the Watson-Curtze Mansion 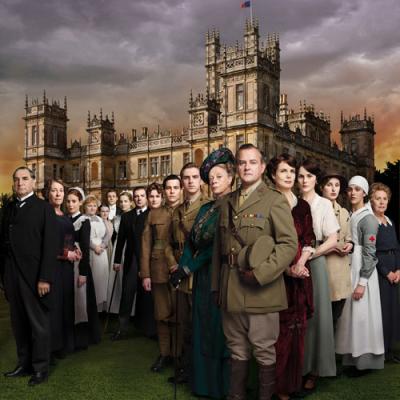 If only for a brief moment, stories take us by the hand, offer us a moment of jailbreak from the routine of our lives as we escape into worlds unknown. They transport us, take us away from the familiar and plunge us into the strange, the alien, the other – all without drowning us in the fear of the foreign.

And the greater the quality of the story – from the writing, to the characters and their development, to the execution of plot – the more likely we are to continue plunging back into the waves of fiction that carry us from the shore of reality.

"When you buy that lottery ticket – for, say, the PowerBall – you know that you're not likely going to win that $200 million," says Tom New, the president and CEO of WQLN Public Media. "But you're going to daydream about that. Downton Abbey offers viewers that same escape, that same chance to daydream."

The British period drama currently airing Sunday nights on PBS is – and it's no secret – a smash hit, appealing to everyone from the twenty-somethings to the eighty-somethings. And from Golden Globes to Emmys to Guinness World Records, the show that follows the lives of those residing at the Crawely family's manor has achieved cult status, enrapturing and transporting millions of cross-generational viewers to post-Edwardian Yorkshire with its "outstanding production values," as New puts it.

"They're excellent – movie theater production quality," he explains of the show's success. "The writing is excellent – just absolutely superb – and perhaps that's where all the best TV shows come from: the attention to production, writing, and acting."

New's right: the serial drama is living big right now, as actors, writers, and directors alike are channeling their energy to find the next Mad Men, or Breaking Bad, or Downton Abbey.

And that buzz and current – the craving for good, quality storytelling to satiate our hunger and thirst for that escapability – is so strong that it's pulsing beyond the glowing rectangles and flowing into the channels of real life.

"People have been suggesting that we do something related to the show for the past year," says Caleb Pifer, executive director of the Erie County Historical Society. "So we actually tried a white-tie dinner at the mansion last year – and it sold out in a week."

While Pifer and the Society are offering the white-tie event again this year – Sunday, Feb. 23 (read: as of publication deadline only four spaces remain for the event) – they're offering even more: A Downton Abbey-themed Cocktails & Trivia night at the historic Watson-Curtze Mansion from 7 to 9:30 p.m. Friday, Jan. 31.

From dressing up in period attire, to toasting champagne, to the trivia competition based on recent episodes of the series, attendees will have the chance to revel in all things Downton Abbey.

"A lot of people follow the show and the characters so closely," says Pifer. "So we thought that this would be a lot of fun and an unique event in Erie."

And if you win the trivia competition? You and your teammates will receive a private reception at the Mansion courtesy of the Society, valued at $500.

But if trivia isn't your thing and you'd rather just enjoy the light hors d'oeuvres and the screenings of different parts of the show in the background, you're welcome to do that. And you're invited to explore all three floors of the Mansion to, as Pifer suggests, "simply enjoy the beauty of the Mansion."

"The show itself has unbelievable characters and excellent writing and storyline," adds Pifer, who says friends got him hooked on the show and now he hates to miss an episode. "As a society, we're still fascinated by the class structure that existed in the Guilded Age… Pull away the variables, and you're left with the idea that it's a story about the class structure."

"I think that when we watch the program," New ponders, who came to the show late, but is now a fan, "we would like to be treated like the people in the Highclere Castle. But probably more than that, it'd be awesome to go down to breakfast and there'd be a meal there."

And for at least one night, Erie residents can wine, dine, and live the high life of the Crawleys – all in the beautiful backdrop of the Watson-Curtze Mansion, as any of us can let the story of Downton Abbey envelop us and transport us to the Yorkshire realm without ever having to set foot outside the Gem City.

Tickets for Cocktails & Trivia at the Mansion are $25, and reservations are required. Each ticket includes three complimentary glasses of champagne. For more information regarding the Erie County Historical Society's event, please visit ErieCountyHistory.com, or call 454.1813.