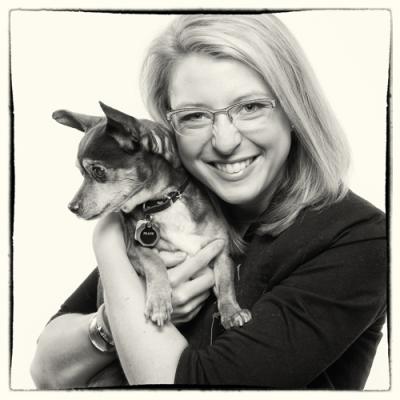 "I believe in growing where you're planted."

Ed Bernik: So Frank is a rescue dog?

Amanda Karns: Frank came from Mexico, he was a street dog. There was a man in town who fostered small dogs. We went to look at another dog but Frank jumped up on my husband Shelby's lap and that was the end of that. He chose us. He was locked up for two weeks and left to die before being fostered, so he has a hard time with confined spaces. He still thinks he's a street dog. Twelve pounds of mean and nasty.

EB: Tell me a bit about your background. You've taken a somewhat unconventional path since your graduation from Edinboro University.

AK: We found out we could work and teach after graduation at Edinboro University's sister school in Shandong University of Technology. At the time, the coordinator was getting his master's, so we had the opportunity to meet the person we'd be working for. Two months after graduation, we sold everything, packed up, and moved to Erie's sister city, Zibo, in Shandong Province.

EB: What did you teach while you where there?

AK: We taught English as a second language to groups of classes. Everything from Shandongese students with little or no English to more advanced students about to transfer to Germany or Australia, just about to emigrate. We were considered professors with a full class load all through the week.

EB: Was this a difficult adjustment?

AK: It was especially difficult for me. I always joke that we lived in a small city of four million. Zibo is considered a small rural city in China. We were some of the first and only foreigners there, so you're an object of fascination everywhere you go. As a relatively private person, that took some getting used to. Also, we were monitored continuously. Every class we taught had a full time monitor, every building had a monitor to watch your movements; but on the flip-side, everyone was so kind and hospitable. Always someone knocking on our door to go out to dinner. We met a lot of ex-pats with whom we still keep in contact. The second year we were there, we got to travel a lot. They have a six week spring break, so we traveled all over China by train and had a bunch of great experiences.

EB: So you decided to stay another year?

AK: Yes, we stayed for two years. By then we were looking for a change. We wanted to be somewhere warmer because Zibo gets pretty cold in the winter. We looked at Milan, Brazil, and finally settled on Mexico. I applied for and got a job as an art teacher at the American School of Puerto Vallarta.

EB: Did you speak Chinese or Spanish going to these countries?

AK: No, no, only some rudimentary bad high school Spanish. I learned enough Mandarin to function. To count, to barter, to get around by taxi. We never became proficient. Mandarin is a tonal language; you can say the same word four different ways and have four different meanings, depending on tone. Spanish was much easier to pick up. Sometimes I still dream in Spanish.

EB: Was it as enjoyable in Mexico as China?

AK: It was but in a totally different way. We worked like crazy people: 14 grades, 22 different classes a week, each customized to different age groups of students. We didn't have the time to travel Mexico the way I would have liked. It breaks my heart what they're going through politically.

AK: We were in Puerto Vallarta, which is a resort town. When I sat down for orientation, they said "You've got guns, drugs, and money on your side." It was in the interest of the cartels to keep us and their kids safe. You did have to get your street smarts back and not be anywhere you shouldn't be after dark, though. I did feel safer in China because the penalties were so much stiffer for criminals.

EB: How did this affect your culinary tastes?

AK: Night and day between China and Mexico. I was able to eat so much fresh food in Mexico. Because we lived in Northern China there was very little fresh food. No salads. It was safer to cook everything, and everything was cooked in pig fat. Also in Mexico, we could recognize foods we were used to seeing in the supermarkets: avocados, mangos, papayas, etc.

EB: You have this business model that I find very interesting. You decided you would work as a graphic designer for nonprofits. A conscious decision?

I love the idea of using my skills for organizations doing positive things locally. The idea that as a graphic designer, I'm a problem solver who can help people is really appealing to me.

AK: I have been doing freelance graphic design since I was 17. When we returned home to Erie, through a contact of my husband, I was able to pick up a job working for a local nonprofit and that started the ball rolling. That led to more and more opportunities. What I enjoy doing are events that raise money for charity. Events that give back to the community. I love the idea of using my skills for organizations doing positive things locally. The idea that as a graphic designer, I'm a problem solver who can help people is really appealing to me. I'm honored to be a consultant to the NonProfit Partnership and teach workshops there helping organizations on a limited budget solve some of their problems.

EB: Why did you elect to return to Erie?

AK: After four years out-of-country, it just felt like it was time to come home. Shelby and I both have big families from western Pennsylvania and New York, and they helped us so much making the transition back. I still get itchy feet but I'm also a big believer in growing where you're planted.