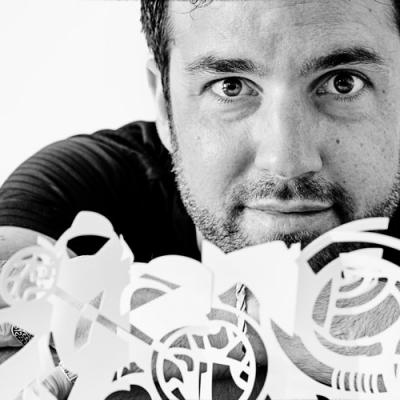 "I'm the lens through which people see."

EB: As I came up the elevator to the 11th floor of the Renaissance Building, I noticed your door said "Higherglyphics Visual Public Relations." Tell me a little bit about what that means.

TS: Visual Public Relations are community-based art projects. They combine manufacturing, project management, and installation. My company produces projects that help create a sense of brand and place-making for the communities we serve, like academic communities, neighborhoods, or nonprofit communities. We create art projects that get a lot of buzz because they are art and not marketing.

EB: Is it possible to combine your personal art and commercial work?

TS: Absolutely! I don't see any division between my commercial work and what would be considered my exhibited fine art. It's all pretty much the same approach, same process, same originator. The difference is that I'm collaborating with a client when I do my commercial work. My so-called "fine art" or exhibited work is really the subliminal expression of my subconscious. With no client yet to receive it, it comes out extremely abstract and pure and usually with very little concrete narrative. Commercial work by nature demands an explanation and narrative and instruction to the viewer. But I see it as all the same type of creative process. In fact, I often combine the two. For example, I will be expressing a sort of subliminal drive when I make these abstract paintings. But when the paintings are done, I go into a very commercial format to get the work into the world. I create brochures, media, and press for it so people can understand it. That's a very commercialized expression of the original creativity.

EB: You have been all over the country and all over the world. Is there a new awakening in our region? Do you think the time is right for the work that you're doing?

TS: My profession is transient. It makes sense for a creative person to continually be moving. In fact, stagnation kind of kills creativity. Regarding this region's potential, I have been to other places that are coming up much faster. So is Erie changing? Sure, everywhere is always changing. Is there a new renewal and rebirth in Erie? Absolutely! There are a lot of young entrepreneurs and people starting businesses here. But can Erie sustain that change and grow? I think that's the predominant question in the arts right now with the schools and city government. Can it change fast enough? That's the universal question about this region, not just Erie. I see the same thing going on in Buffalo, Cleveland, and Pittsburgh. The Rust Belt is not moving as fast as places like Asheville, North Carolina, Louisville, which I just visited, or Santa Fe, where I moved from most recently.

EB: We see these pockets of change, but I think it's a matter of whether enough people in a region will latch on and embrace change. Do you think that's possible here given the politics and mindset?

"I think one role of the artist is to create the visual change, so people start thinking about change."

TS: I think if Erie or this region wants to embrace change it has to assume the culture of change. I don't see that: people interested in changing. In Louisville, people want change. They embrace their past but they like new things. They have this aesthetic and cultural value that permeates everything. It could be someone who is a shop owner, someone who works in a factory, and someone who is an artist: they're all embracing the changing process. I think one role of an artist is to create the visual change, so people start thinking about change. Look at our downtown: It doesn't change its appearance. That's a great job for artists. We have Erie Arts and Culture. We have Erie Art Museum. Why don't we have a team of artists combing through these streets and changing them? It's happening little by little but not in any concerted group effort. My sense is that creativity is supported by business structure. I show up every day at 9 a.m. and leave every day at 5 p.m. because that structure enables creative change. It's the way the world works.

EB: Where are some of the places we can see the work you do?

TS: Our largest project is in the new Advanced Manufacturing and Innovation Center at Penn State Behrend. The second place I would say just in terms of scale would be an 8,200-square-foot façade mural on Mercyhurst Preparatory School. The third would be a 1,200-square-foot annex stairwell project at Erie Art Museum. That was our launch project, and I did it on a laptop in my bedroom.

TS: Before I came back to Erie, I designed the Dennis Hopper Lifetime Achievement Award. I was able to hang out with him at the 2009 Albuquerque Film Festival. That's actually one of the first visual public relations projects that I did. I also have a piece in Metz, France: a mural that was painted for one of the inauguration parties for the Centre Pompidou-Metz. Before that, I was an exhibiting artist so I have paintings around.

EB: Where do you see Higherglyphics in five years?

TS: I am getting more into the collaborative format of what I can do for communities. In other words, Higherglyphics could go into a community on a consulting and art direction basis. It wouldn't be so much about my work at that point but I would be art directing and using my management tools, things I have learned, and PR stuff, to show how to release information about the community. But I would be solely working with local community artists. Something like that has not been attempted on a large scale. You see musicians doing this all the time: working with each other, producing each others' albums. But it happens rarely to art, especially in public or community art.

So I think there is a huge niche I could fill in this country for communities that are up-and-coming and want to talk about themselves. They need community art. They already have artists locally but the communities don't know how to put these projects together. This is where I think we're going in five or 10 years and maybe sooner.

EB: What's one statement that describes your mission?

TS: I have a mantra: "I'm the lens through which people see." It's the thing that gets me into this office every day.

Raise a Glass for Arts & Drafts