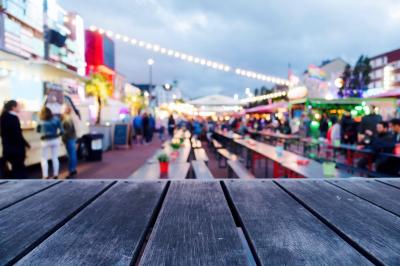 The first course of the Erie Food Truck Festival did exactly what it intended to do — stoke an appetite for more.

"We learned that people in Erie County really like food trucks," recounted Kate Philips, chairperson of the festival and CEO of the consulting firm Parker Philips. "This was something people wanted." Democracy sometimes votes with its belly, and 5,000 ballots were cast last year in favor of a repeat.

Food trucks have grown into a local phenomenon this past decade, one that simultaneously could be anywhere (thanks to wheels and combustion engines) and doesn't appear to be going anywhere soon (because deliciousness). For one day, you can taste what the fuss is about all in one place — the former GE Fields in Lawrence Park.

Attendees are invited to graze all day in these welcoming pastures, with the festival running from 11 a.m. to 8 p.m. Even if you so choose to stay for multiple meals, there will be some tough decisions to make, as the roster of participating vendors has been upped from 15 to 24 this year. "Bigger and better" is the mantra for the second Food Truck Fest — and appropriately, you'll have little trouble leaving a little bigger than when you arrived, between waffles (A Waffle Miracle), tacos (The Atacolypse), pizza (Sticks & Bricks, Benvenuti Pizza Factory), cheesesteaks (Fat Boys Phillys), smoked meats (The Que Abides, Hawk's Grocery and Smokehouse), ice cream (Bruster's, Cold Stone, Shabby's), and more.

Philips is looking forward to a more streamlined experience this time around, as Festival Fun Chips will be the only form of currency accepted within the festival grounds, for both the food trucks and the merchandise, beer, and wine tents (yes, plenty of local libations will also be available); however, your credit cards can be used to pay for them. The expanded food truck fleet should result in shorter lines, and the start time being pushed back to 11 a.m. should better accommodate the lunch crowd — as well as two additional bands.

That's right, the Erie Food Truck Festival is not only a celebration of local food, but also of local music. Enjoy the musical stylings of seven area bands while you metabolize, including:

With another large turnout expected, this is clearly a festival with a future worth salivating over. — Matt Swanseger