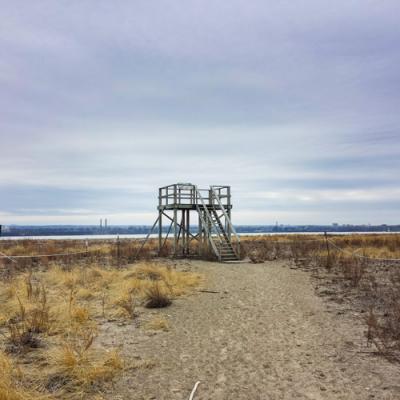 It is one day after Trump's inauguration. There is now an administration of climate deniers in office, a federal bill with legislation crafted to devalue our national forests has recently been passed, and here at home we can't figure out how to keep our schools open. I need some space to clear my head, reflect, and refill – I know just the place.

Far beyond the well-trodden trails of Presque Isle's interior lies a wild and windswept landscape known as Gull Point. This vast expanse is dotted with rolling dunes and shallow coastal lagoons. Day by day, the soft extremities of this sandy mass are swept to and fro, molded and reshaped by the sculpting action of churning waves. Each visit to the point is an expedition into something fresh and new.

I arrive at the trailhead, tucked away at the back corner of the Budny Beach parking lot. Winter hiking on this trail is a treat. Intermittent stretches of typically muddy and swampy terrain crust over in cold temperatures. From April 1 to Nov. 30, strict boundary restrictions enacted to protect nesting migratory birds affect access to certain areas. But in late January, I have free range to wander.

Several times along the way, the trail cuts to the coast and runs me through thick stands of aspen trees and tall grasses. A brazen troupe of young male chickadees chaperones me as I pass through their turf, taunting me with chirps and cheeps while strutting their stuff through dense thickets of bayberry. 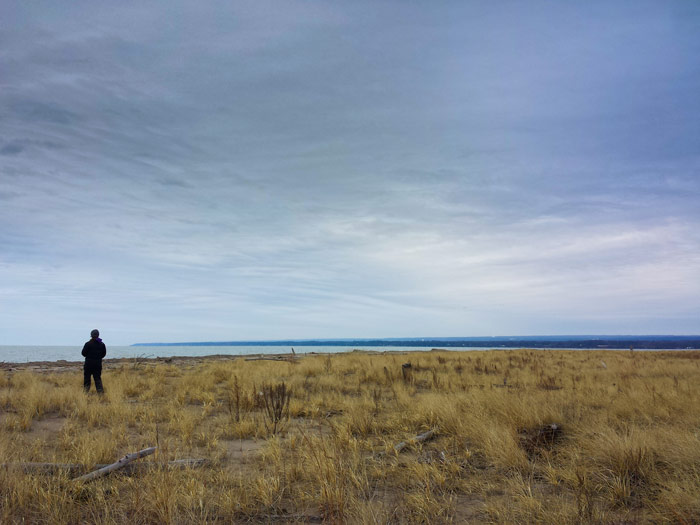 Northern Bayberry is a short coastal shrub that produces clusters of small blue-white waxy berries. American colonists boiled the berries to extract the sweet-smelling wax, which they used to make clean-burning candles. During fall, aromatic leaves dry up, turning a reddish-brown. I gather several in hand and roll them between my palms until crushed. A pungent spicy-sweet aroma rises from the potpourri: lovely. The troupe returns, annoyed that I have yet to vacate the premises. I move on to avoid any trouble.

In the distance, I hear the telltale chorus of cackling, yodeling, and all around ruckus that generally accompanies the presence of shore birds carrying on. I am getting close to the point.

It is in this moment that I realize how lucky we are, we Erieites, to have our own wraparound front porch. This wild place that lets us step away from our city to turn and look back on what we have built, and think about where we are going.

All at once, the tight walls of brush alongside the trail fade down, and the terrain opens into a vast expanse of gently rolling grassy dunes. Hundreds if not thousands of seagulls dot the sky. I make my way to the lone observation tower standing tall on the horizon.

From the top, I do a slow spin to take it all in. It's a breathtaking panorama. The sandy foreground fades north into the endless blue of Lake Erie. The lake fades east to the shoreline bluffs of mainland Erie, and then wraps back to the wilds of Presque Isle on which I stand.

It is in this moment that I realize how lucky we are, we Erieites, to have our own wraparound front porch. This wild place that lets us step away from our city to turn and look back on what we have built, and think about where we are going. Yes, we've got messes to clean up here at home, and more in the making for our nation; but from Gull Point, things are looking good. I believe in Erie because I see its Gems, and they keep me feeling positive.

If you would like to discover Gull Point, Join Matt for a free guided group hike Saturday, Feb. 4. Register at mattfang.com/gull-point-hike.