This night another kind of history could be made during a gala fundraiser. It's a chance to convince investors to back a musical conceived and built by an Erie family called The Storm. Like the Olympics, it's taken years of preparation for one performance; success means the next step of off-Broadway. A lack of interest could send the project, like so many others before, to Broadway's trash heap of broken dreams.

A family member slowly paces across the back of the room. The lights dim…

It is a story Jeremy Long has heard his whole life, a young girl who becomes a child star, the focus of a domineering stage mother who grows up to find success in Hollywood's silent movies. Later she becomes a young mother and performer who marries her war hero husband. She would sing and dance. He played piano. Eventually they would move to a small northwestern Pennsylvania town to open a small business. She would teach dance and he would lay down the rhythms on piano.

It was post-war America and it was happily ever after. Almost.

It may have been a story, but it wasn't fiction. It was the lives of Marge and Jim "Shorty" Long, who came to Erie to open a small studio at 719 State Street. It would become the genesis for the Long's School of Dance, which exists to this day.

Jeremy Long grew up with the tales of his grandparents. He would be trained on the piano by his grandfather, who had started with the classics but learned big band, jazz and swing because that's where he could make money. It would be the same path he would show his grandson. 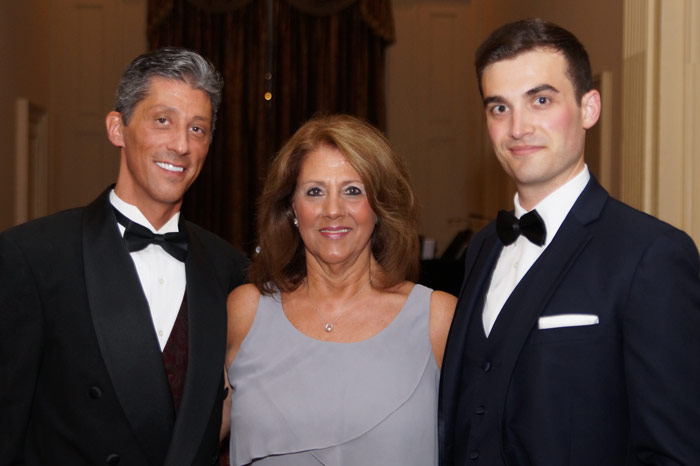 Jeremy had his own dreams, of moving to New York and making it as a composer and accompanist. Maybe he could pen a show that could make it all the way to Broadway! The idea of marrying that dream of the bright lights with the family history came together one night when he was watching Turner Classic Movies with his grandmother.

"We were watching a movie and I said to her that the movie reminded me of her. 'Your story could be a movie.'" She looked at her grandson. "Who the hell would want to watch us?"

But the seed had been planted. Should it be a book? How about a movie? No, music and the stage were too central to the theme that is Marge and Shorty. This story deserves to be a musical, Jeremy concluded, and on a grand scale, too.

Penning an entire musical is a huge undertaking, but Jeremy had some secret weapons. He has his grandfather's catalogue of original music. He has a mother who grew up in dance and was taught by her mother-in-law Marge. Marguerite Timko-Kinney (of Marguerite's School of Dance) knew the family music well and knew that the songs, representing more than 40 years of history, would guide both the movements and her son's direction.

"I think the music tells you what to do. It was a very personal thing. I'm very excited; it comes together as an interesting story."

So Jeremy and creative partner Cory Herman started the task of weaving 14 songs through a script of the life and times of Marge and Shorty. The gala would be an abbreviated look at the full musical, and the plot device for the sneak-peek would be Marge as an older performer narrating a look back over scenes of the play which was her life. It was hard work to finish, but it would turn out to be the easiest part of the project.

"The hardest part is the networking," Jeremy told me. "It takes a long time to get to know the people you have to get to know. It's a closed circle of people who work on Broadway. It's not easy for an outsider to get in."

That means a long journey that begins with holding a number of smaller fundraisers to raise enough money to hold a large fundraiser. A local event held in April at the Nuova Aurora Club, a plea for donations on the web page, a GoFundMe campaign — all were necessary to cover the cost of renting the Roosevelt and hiring the cast and production teams.

The key role of Marge as narrator fell to Pennsylvania based actress Lynn Flickinger. "I really love Marge as a character; she is really well-rounded, a real person. And her song that I get to sing really shows that."

It's not an accident that Marge appears as a real person since she's based on one. And Jeremy was determined not to overlook shortcomings, including weaving both her domineering stage mother and her husband's infidelity into the plot. "You can teach people by watching and learning through bad things," Jeremy says, "to keep your head up. They were human and regardless of talent they make mistakes."

Actress Colleen Roberts took on Margie as a young mother and performer. She took time from an Indianapolis performance of West Side Story to tell me how much she appreciated the script's old-time glamour and heart in an age of technology. "I didn't want her to look like a martyr I wanted to make sure she came off as a strong survivor and I knew a lot of people in the audience knew her."

And there's another key character seen as essential to the musical's success: the backdrop of Erie. "Erie isn't Iowa but it is Middle America," according to the show's co-producer Ted Kurdyla. "It's very important that Erie stay in the show. If this couple were from New York City, it would be an entirely different production."

The music fades as the performers freeze in their final poses. There is momentary silence then the applause begins then grows. The audience rises to their feet. As a result there is not one but several investors looking to underwrite The Storm. Jeremy Long hopes to be able to announce something in the next few months.

And he's also hoping to finally answer a question posed by Grandma Margie all those years ago: Who the hell would want to watch us?

Scott Bremner is a three-time Emmy award-winning journalist. He is currently a daily talk show host on JET Radio 1400 and the assignment editor for WJET and FOX 66. He can be reached at sbremner28@gmail.com.