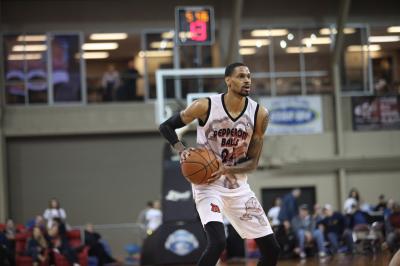 Raphiael Putney
The Erie BayHawks reassume their alter-egos as the Erie Pepperoni Balls u2014 including totally unique uniforms and branding u2014 for their game against the Delaware Blue Coats on Saturday, Feb. 1 in a reprise of 2017-18's popular What Could've Been Night.

Erie is known for many things; however, it seems that one local delicacy may reign as most popular amongst Erie's accomplishments, even garnering respect as a basketball mascot two years running.

On Feb. 1, the NBA G League Pepperoni Balls are returning to Erie for one night only to defend their home court against the Delaware Blue Coats.

Those who attended the Erie BayHawks' "What Could've Been Night," as part of the 2017-18 season, may recognize the Pepperoni Balls.

The savory dough treats inspiring the BayHawks' temporary rebranding have been a staple of Erie's cultural identity for decades, although "the exact origins of the pepperoni ball remain steeped in local mythology," according to the Erie Reader's Jonathan Burdick. "Some have described them as a cousin to the pepperoni roll, which was popularized by West Virginian coal miners during the 1930s before spreading throughout Appalachia," he continued.

The one-night rebranding event was created in conjunction with United Way of Erie County to raise money for the Imagination Library, an initiative started by Dolly Parton to provide age-appropriate reading materials and books to children in need.

Enthusiasm during and following the previous event inspired BayHawks management and supporting organizations to bring Erie's Pepperoni Balls back to the court.

"The team will wear red uniforms for the game adorned with the delicious Pepperoni Balls logo," said Michael Somrak, director of communications for the Erie BayHawks in a press release announcing the event's return. "The uniforms will be auctioned during the February 1 game, with proceeds benefiting the United Way of Erie County's Imagination Library."

Also new this year is a Pepperoni Balls bobblehead giveaway to the first 1,000 fans in attendance on game night. Pepperoni balls will be available for purchase (and eating) at the event courtesy of Erie Events and International Bakery, with the proceeds from the first 2,000 balls sold going to United Way's cause.

"I've never met a pepperoni ball I didn't like," said Erie Mayor Joe Schember. "Pepperoni balls are a great contribution we have made to Italian-American cuisine, he added. "We are proud to claim them as uniquely Erie."