The Erie Philharmonic brings the extraterrestrial to the Warner 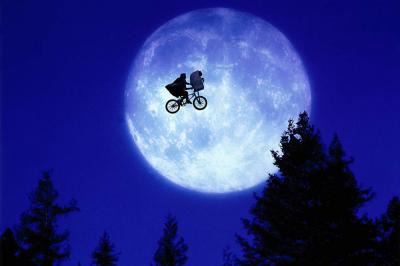 Universal Studios
Steven Spielberg's much-beloved film *E.T. the Extraterrestrial is indelibly linked to its equally beloved score by John Williams. Feed your nostalgia the Erie Philharmonic performs it live in sync to two screenings at the Warner Theatre.

The '80s, kids on bikes, and a scared outsider drawn to a particular food. Sound familiar? Before Netflix was turned "upside-down," these were just some aspects of Steven Spielberg's hit film, E.T. the Extra Terrestrial. E.T. will get the live orchestra treatment twice, with the Erie Philharmonic performing the film's score in real-time during each screening.

For those who have just crash landed on earth and are not familiar with the movie, E.T. tells the story of the bond between a lost alien and a young boy named Elliott. The extraterrestrial (E.T.) marvels at the simplest things earth has to offer — he waddles around in the family's flannels, chugs beers in the morning, and can't keep his hands off the candy. He endears himself to children with his naive whimsy, and to adults for reminding them of their college roommates.

This is not uncharted territory for the Philharmonic. The orchestra has immersed audiences by playing along with classics such as Casablanca, Looney Tunes, the works of Pixar, and even live video games. While Daniel Meyer conducts the actual orchestra, at the helm of the organization itself is executive director Steve Weiser, who began as a percussionist. Season after season, the group (made up of members of the community) continues to prove itself to be "not your grandparents' orchestra," according to Weiser, by creating an experience for audiences both young and old.

"The compliment we most often get is people almost forget an orchestra is even playing along," he observes. For this event in particular, the executive director is excited for the orchestra to play this film's beautiful score. "Anytime you can have an excuse to play John Williams," Weiser notes, "it's the perfect concert."

So zip up a red hoodie, hop on a bike, and join the Erie Philharmonic for an event that will melt hearts or at least make them glow.