Experience how Rodgers and Hammerstein evolved through the ages 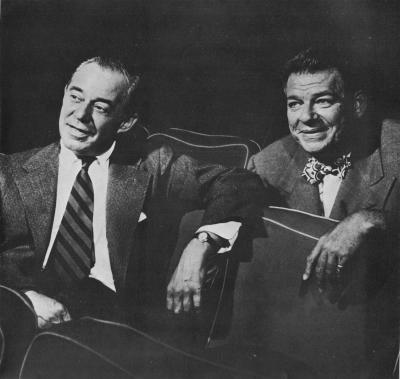 Wikimedia Commons
Richard Rodgers (left) and Oscar Hammerstein II were responsible for some of the most popular musical theatre of the 20th century.

NOTE: AS PER THE STATEWIDE CLOSURE OF ALL NON-ESSENTIAL BUSINESSES, THIS EVENT HAS BEEN RESCHEDULED FOR THURSDAY, JUNE 25 AT THE ERIE INSURANCE ARENA.

Between 1920 and 1960 is considered the Golden Age of American Musical Theater, largely thanks to the duo of Richard Rodgers and Oscar Hammerstein II. The musicals produced by this Broadway partnership are some of the most well-known of all time. Rodger and Hammerstein's repertoire includes Oklahoma (1943), The King and I (1951), The Sound of Music (1959), and more.

"It's a pretty rare thing to hear Rodgers and Hammerstein as it was originally written," said Kate Thiem, one of the nine soloists and an organizer of the show. Thiem has been performing with the Erie Philharmonic in some capacity since 2011 through joint productions with Erie Playhouse.

"So often now when you go to the theater to see a national tour come through, the orchestra is so reduced," Thiem said. "You usually have maybe a few keyboards and then maybe eight to ten other instruments. [With the Erie Phil], you're going to hear these songs — performed by a full orchestra — as they were originally intended to be, which doesn't happen a lot today."

Erie Philharmonic conductor Daniel Meyer and Thiem put together the set list, choosing three to five songs from each of the musicals. Through their arrangements, audiences will hear how the Rodgers and Hammerstein style evolved throughout their decades working together.

"These are songs that have lasted and have endured for so long and have been covered by big singers of every generation," Thiem said. "They keep coming around," she continued. "There has to be a reason for that longevity." — Hannah McDonald