Erie Phil Picks a 'Side' with West Side Story 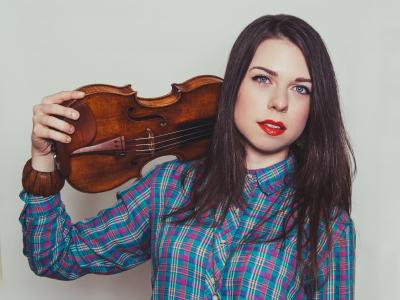 Lauren Nesberg
Kentucky-born concert violinist Tessa Lark will feature as a guest soloist in the Erie Philharmonic's *West Side Story program, highlighted by the bluegrass-inspired piece Sky, written especially for her.

Young lovers, separated by warring factions in their city — trapped in a blood feud for control of the streets — come to tragic ends when violence erupts between their families and shatters their newly found joy.

If this sounds like the plot of Romeo and Juliet…

It's because the 1957 musical West Side Story is indeed loosely based on William Shakespeare's tragedy, and in the same way that the Bard influenced theater (and how we think about life) irrevocably from that point forward during the Elizabethan Age, Leonard Bernstein's West Side Story marked a turning point in American musical theater.

The Erie Philharmonic is presenting some of the most recognizable (and danceable) moments in Bernstein's score, the finale of an evening filled with distinctly American sounds. The Phil will open with Howard Hanson's Symphony No. 5, move onto "Sky" by Michael Torke, and continue with selections from Our Town by Aaron Copland, that most quintessential of American composers.

As if this wasn't special enough, also gracing the Warner Theatre stage is Tessa Lark, barely 30 and already a renowned concert violinist with numerous guest credits to her name. In addition to her guest solo (the Torke piece, "Sky," was co-commissioned by the Erie Phil, written for her and inspired by the bluegrass of the American South), the Kentucky-born musician will appear at WQLN's Live from Studio Q, a Friday afternoon performance which is free and open to the public (visit WQLN Studios, 8425 Peach St., that day at noon).