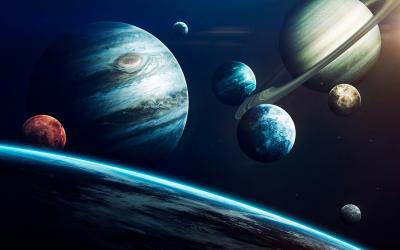 Vadim Sadovski
The Erie Philharmonic brings the awe-inspiring majesty of Gustav Holst's The Planets to the Warner Theatre stage, presenting this symphony alongside two other astronomical works while also featuring the talents of accomplished accordionist Hanzhi Wang.

The Erie Philharmonic's Symphonic Series is back in 2023 with Gustav Holst's The Planets, an interstellar selection preceded by Sidereus from Argentinian composer Osvaldo Golijov, and Astor Piazzolla's "Aconcagua: Concerto for Bandoneon and Orchestra" featuring accordionist Hanzhi Wang in her debut with the Phil.

Regarding The Planets, the Erie Philharmonic explains: "Each movement of the work is a tone poem inspired by the personalities of the gods after which each planet is named. In music that has deeply influenced sci-fi composers like John Williams, The Planets stand as an epic journey through our solar system that is as fascinating as it is awe-inspiring."

Holst, who wrote the seven-movement orchestral suite between 1914 and 1916, took inspiration from astrology in the composition and naming of the pieces, with titles such as "Mars, The Bringer of War" and "Jupiter, The Bringer of Jollity." Although various movements were first performed between September 1918 and early 1920, the first public performance of the complete suite was on Nov. 15, 1920 by the London Symphony Orchestra at Queen's Hall.

The concert also features the works of Argentinian composers Osvaldo Golijov and Astor Piazzolla, a unique pairing as Golijov paid tribute to Piazzolla in his piece Last Round, written after Piazza's death in 1992. Golijov, currently composer-in-residence at The College of the Holy Cross and frequent collaborator of filmmaker Francis Ford Coppola, was commissioned to write Siderius to honor Henry Fogul, a former president of the League of American Orchestras, for its premiere in 2010 with the Memphis Symphony Orchestra.

Accordionist Hanzhi Wang, the First Prize Winner of the 2017 Young Concert Artists International Audition, has performed at venues such as Carnegie Hall and Kennedy Center, and received critical acclaim at the 40th Castelfidardo International Accordion Competition in Italy. Wang has taught and performed all over the world, with performances and master's classes at the Manhattan School of Music, Royal Danish Academy of Music, and Tianjin Music Conservatory along with serving on juries for accordion competitions in Rome and Portugal. She studied at the China Conservatory of Music and the Royal Danish Academy of Music for her undergraduate and graduate studies.