Kiss Me, Kate is a classic musical that promises as many onstage fireworks as a Roman candle factory afire. 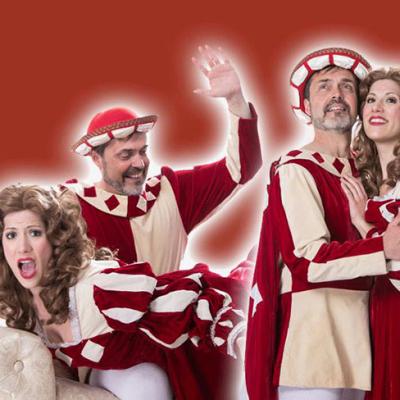 Kiss Me, Kate is a classic musical that promises as many onstage fireworks as a Roman candle factory afire. It's a song-and-dance show written by Samuel and Bella Spewack, with lyrics by Cole Porter.

Debuting on Broadway in 1948, this comedy has seen several major-league revivals plus countless small-theater productions in its almost 70-year history, even garnering the first Tony Award for Best Musical.

Debuting on Broadway in 1948, this comedy has seen several major-league revivals plus countless small-theater productions in its almost 70-year history, even garnering the first Tony Award for Best Musical.

"First, it was written in the golden age of musicals and by Cole Porter, who is one of the most prolific composers of that era," explained Richard Davis, director of the Playhouse's current incarnation.

"We are doing the most recent Broadway revival which has re-orchestrated the show. It has fantastic new dance arrangements and the script has been tweaked. But any changes have been made with respect to the intent of the original," he added.

Kate's plot orbits around actor-director-producer Fred Graham, in a production of Shakespeare's Taming of the Shrew alongside ex-wife, Lilli Vanessi, with whom he feuds constantly. Though busy with Shrew, he manages time to chase sexy young co-star Lois Lane, though she's involved with fellow costar, Bill Calhoun, who himself was involved with Lady Luck – until recently. Hence, the gangsters who prowl the theater seeking recompense. A play set within a musical, Kate offers a daisy chain of people and events more interlaced than the Olympic flag.

Then there's the music.

Along with such toptapping tunes as "Too Darn Hot" and "So in Love," what else can patrons anticipate?

"[Theatergoers] can expect to have a thoroughly entertaining evening with great laughs, innovative dances choreographed by James Dixon, fantastic music, and a little tug on the heartstrings," guaranteed Davis. – Gregory Greenleaf-Knepp