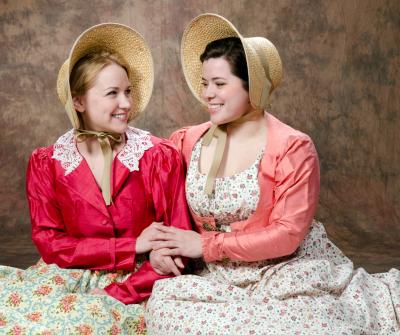 The aligning of our head with our heart determines not only how we see love, but also how we perceive the world and experience both the swells and surges of romance and the crashes and pangs of heartbreak. But rarely do these two – our head and our heart – pilot our ship evenly, and often either our intuition or our reason overrule one or the other and take command of our vessel, sharply steering us askew.

"Expect to see two very different perspectives on love – because we have very different views on what love should be – and how we work through that during the show," says Marie Glaser, who plays the role of Marianne in the upcoming Erie Playhouse production of the Jane Austen classic "Sense and Sensibility." "How it affects us – it is very interesting to see how we both end up with love, but in very different ways."

Glaser, who comprises one-half of the dynamic sister duo at the heart of Austen's 1811 work, will make her Mainstage debut in the Carolin Lynn-directed play, which opens Friday, March 8. Jennifer Blair, who was last seen at the Playhouse for back-to-back YouTheatre and Mainstage productions 12 years ago, will take on the role of Elinor, Austen's other Dashwood sister.

"We both veer off, and there's a happiness in the end," Blair says of the sisters' journey, as the story follows their travels to a new, modest abode, where they encounter love, loss, and travails along the way. "[Marianne] thinks with her heart, whereas Elinor is sensible – she thinks too much with her head. And so that's where  the two intertwine."

"And finally get it right," Glaser adds. "It's kind of like, 'Follow your heart but take your head with you.'"

While the Playhouse has yet to perform "Sense and Sensibility," the local theater is familiar with Austen. Just a few seasons ago, Erie saw a run of Austen's "Pride and Prejudice" by Jon Jory, the same playwright behind this version of the Dashwood sisters' tale.

"We find with our dramas – and any show really – that we're a little bit further ahead with the Erie audience with a show if we pick names somewhat recognizable," explains Lynn, whose most recent work at the Playhouse featured her in the director's chair for "Frost/Nixon." "'Sense and Sensibility' and 'Pride and Prejudice' – those two names are probably the most recognizable for Jane Austen."

Whether audiences are familiar with Austen, Lynn, who also serves as the Playhouse's assistant business manager, has worked with the 12-person troupe to ensure the audience understands the language and the storyline – both crucial to the unfurling of the sisters' tale. And while Jory wrote the script in two acts without clearly defined scenes in what Lynn notes as "admitting theatricality," Lynn explains that she's employed both the heavy use of lighting and costuming – a change of hat here, a removal of scarf there – to help usher the audience through both time and space, creating a seamless transition as the story continues.

But amidst the fluid nature of Jory's script, lie the two sisters at the heart of the story. And their tender and earnest approach to their characters drives the plot forward.

"The actors in this particular production have embraced each other and the show so well that I think they're going to see two sisters who are honestly affectionate to each other and care about each other," Lynn says of her principal stars.

"It really has kind of become a sisterly thing between us," Blair confirms. "It's very easy – it's definitely not work. There are moments when I feel nervous or hesitant and [Glaser's] like, 'You got this.' And it's really cool. It's a very friend-sisterly thing to do."

"What [the audience is] going to notice is how darn adorable the ladies are in their relationships," Lynn adds. "I have some very dashing men in the show, as well, who are doing fantastic jobs – and they carry a lot of the weight for some of the humor in the show – but I think that the two girls are just so darn fond of each other as people and that carries into the show. The cuteness factor is through the roof."